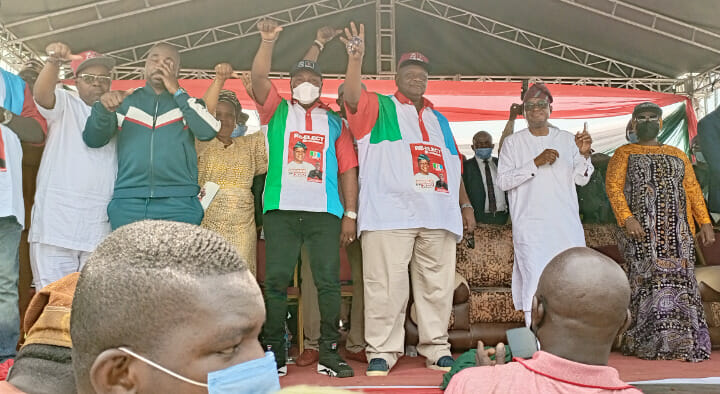 Some members of the National Union of Road Transport Workers (NURTW) and its leadership have endorsed Governor Adegboyega Oyetola for second term in office.

The endorsement was done at the Mandela Freedom Park, Osogbo, the capital of Osun state.

The road transport workers have joined other groups of workers and stakeholders in Osun who have thrown their weight behind Oyetola’s second term ambition.

According to the groups, they are ready to ensure the success of the governor in the 2022 governorship election.

Recall that the workers in October under the platform of Nigeria Union of Local Government Employees (NULGE) and their counterparts in the Nigeria Union of Teachers (NUT), had endorsed Oyetola.

Speaking at the event, the chairman of Osun NURTW, Comrade Olalekan Folorunso said the union decided to endorse Oyetola after assessing his remarkable and unprecedented achievements in the last three years.

Folorunsho who doubled as the zone 2 council chairman (NURTW southwest) , described Oyetola as a man of outstanding leadership traits and professional know-how.

He added that the union in particular and the state in general have benefitted from these qualities in no small measure.

He commended the Governor for the exemplary way he has been piloting the affairs of Osun and appreciated his administration for the recognition accorded the union as critical stakeholders in the development of the state, stating that “it has never been this good”.