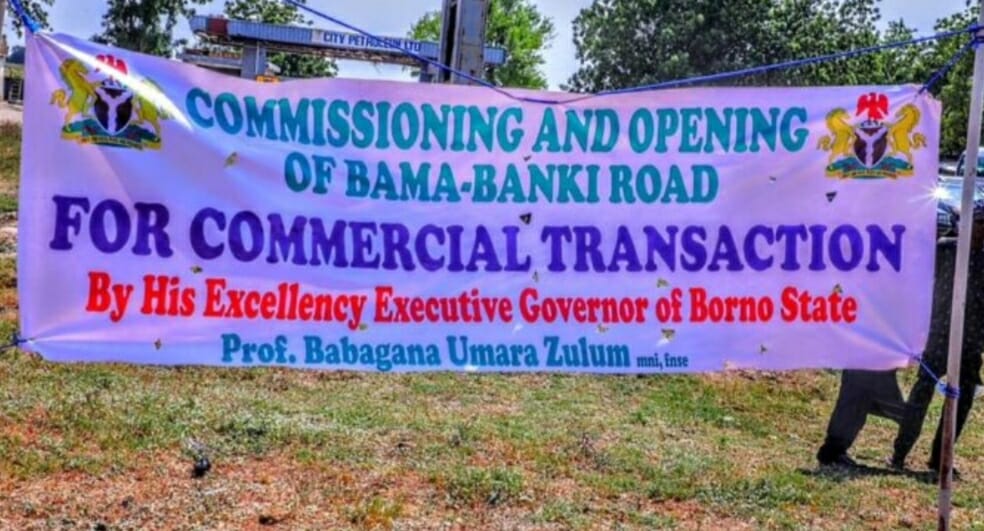 Governor of Borno state, Babagana Zulum on Wednesday has reopened the Bama-Banki road which connects Nigeria to some other African countries.

The 65km road, which connects Nigeria to countries such as Cameroon, Zaire and Sudan, is said to have been closed for nine years due to Boko Haram operations in the area.

The governor while speaking on Wednesday at the official reopenong of the road at Banki junction in Bama LGA of the state cautioned immigration personnel and other security operatives against extorting road users.

Zulum also asked security operatives to arrest persons found diverting from the main road towards the bush with smuggled goods, adding that such perpetrators would be treated as insurgents if arrested.

“I am very much impressed to witness the official reopening of this very important international road. This road has remained inaccessible to people since 2012 due to activities of Boko Haram, but with the commitment of President Muhammadu Buhari and our security agencies, we have reopened it,” he said.

“As we are coming here today, I have sighted some immigration personnel busy extorting our motorists along the Maiduguri-Bama-Banki junction, which is unacceptable.

“I want to strongly sound a warning, especially to immigration personnel and other sister agencies to desist from extorting motorists and passengers while plying the road.

“On behalf of the government and the people of Borno state, we appreciate the efforts of President Muhammadu Buhari through the chief of defence staff, general Lucky Irabor, for the restoration of peace and stabilisation in the state and the north-east region.

“Likewise, as the chief security officer of the state, I have given an order to the military to arrest anybody engaged in smuggling of goods, especially diverting the main road to the bush with food items. Therefore, any perpetrator, if arrested, should be treated as a Boko Haram member.”

He also commended the efforts of security agencies on ensuring safety for farmers in the area.

“Last year, we made an appeal to the Nigerian military to allow farmers have access to their farms, and from the look of things, quite a number of our farmers would have a bumper harvest this year,” Zulum said.

“This is so commendable as the support our internally displaced persons get from non-governmental organisations (NGOs) is no longer sustainable.”

He also asked the theatre commander of operation Hadin Kai and troops of 151 and 152 battalion to support in efforts to ensure safety of travellers plying the route.