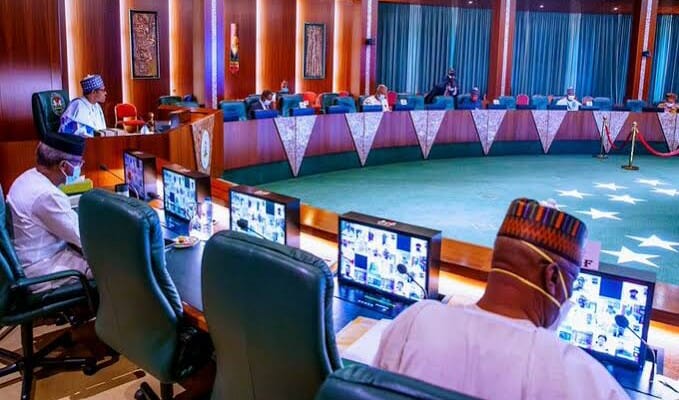 The Federal Executive Council(FEC) has approved the National Development Plan (NDP) for 2021 to 2025 to succeed the Economic Recovery and Growth Plan(ERGP) which expired in December 2020.

Zainab Ahmed, Minister of Finance, Budget and National Planning, disclosed this while briefing State House correspondents after a virtual FEC meeting presided over by Vice President Yemi Osinbajo on Wednesday at the Presidential Villa, Abuja.

The minister said that plan had been costed to have an investment size of N348.7 trillion over the five-year period.

“The Ministry of Finance, Budget and National Planning presented a memo requesting approval for the NDP for 2021 to 2025, which is a plan that is succeeding the ERGP which expired in Dec. 2020.

“The plan is underpinned by a macro-economic framework, which projects an average real GDP growth of five per cent per annum over the plan period.

Outgoing ministers will always be your disciples, Akpabio tells Buhari

“Also, the plan has been costed to have an investment size of N348.7 trillion over the five-year period.’’

Mrs Ahmed said the investment size will comprise N49.7 trillion from the public sector, representing 14.3 per cent and N 298.3 trillion, representing 85.7 per cent.

According to her, the public sector expenditure component of N49.7 trillion will be contributed by both the federal government and the states.

“The funding strategies for the plan have also been identified and these include broadening the tax base, enhancing the capacity of the private sector through creating investment opportunities and deliberate policy engagements and incentives.

“There will also be exploring domestic and concessioning financing sources and setting up financial investment vehicles such as growth funds and public private partnership as well as the Nigerian Investment and Growth Fund.

“There will also be a Development Plan Implementation Unit that will report to the National Steering Committee, which will be headed by the vice president with the Minister of Finance, Budget and National Planning as vice chair.’’

The minister said the establishment of the Development Plan Implementation Unit would be in the planning arm of the ministry.

She said the coordination of the implementation of the plan would be carried through to ensure that MDAs, state governments, private sector operators, civil society organisations, among others, are all working in a coordinated fashion.

According to her, the plan also has a specific concentration to deliver during the five-year period.

“Immediately we get this plan launched we will be continuing work on the longer term plan, which is the Nigeria Agenda 2050.

“This is to make sure that we don’t have a vacuum going forward; we have a medium term plans for five years and there is a long term plan which is the Nigeria Agenda 2050.

“The long-term plan, the Nigeria Agenda 2050, work will continue immediately we launch this medium term plan.

“ Going forward, the national annual budget will be derived from the plan, the details of which have already been costed.

“All MDAs will be required to draw their programmes and projects from the detailed plans that they themselves have submitted during this process; the NDP 2021 to 2025 has been approved today by the FEC for implementation as a successor plan to the elapsed EGRP 2017-2020.”

On his part, Ministry of State for Budget and National Planning, Clem Agba, said that the governance structure of the plan would have Atedo Peterside, as co-Chair from the private sector.

He said the National Steering Committee had 42 members comprising key ministers, representatives of the Manufacturers Association of Nigeria, other organs of the private sector and six governors representing the geo-political zones.