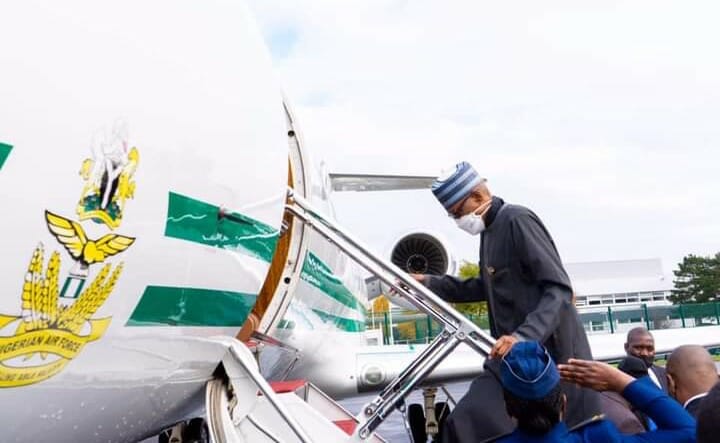 President Muhammadu Buhari, on Saturday, left Paris, the French capital, to join other African leaders in South Africa for the opening ceremony of the 2nd Intra-African Trade Fair (IATF) 2021, which takes place on Monday.

According to a statement issued on Saturday by his Special Adviser on Media and Publicity, Mr Femi Adesina, the President is attending the event on the special invitation of South African President, Cyril Ramaphosa.

Adesina stated that global businesses including non-African international brands are expected to key into opportunities generated by the fair, thereby attracting for the continent trade and investment deals worth $40billion.

The event, held from November 15 to November 21, is being convened by the African Export-Import Bank (AFREXIM) in collaboration with the African Union Commission (AUC) and the African Continental Free Trade Area (AfCFTA) Secretariat.

The theme of the Fair, ‘Building Bridges for a Successful AfCFTA’, aims at boosting trade and investment across the African continent.

Adesina said it also promises to create the enabling environment for businesses to thrive across the African continent; bring to fruition the lofty ideas behind the creation of the AfCFTA by providing the platform to further identify and proffer solutions to challenges militating against intra-African trade and; generate market information needed to connect buyers and sellers throughout the continent.

He explained that various Nigerian investors are already in Durban to take advantage of the event.

“President Buhari is expected back in Nigeria on Tuesday, November 16.”