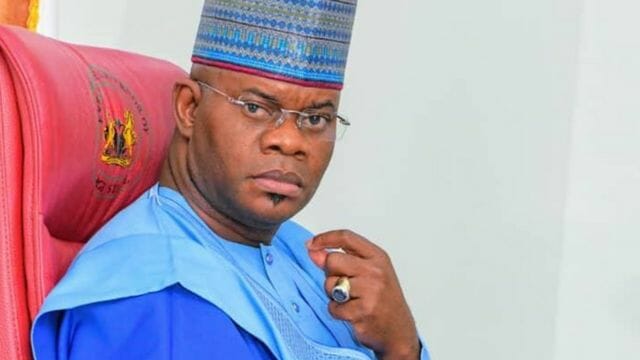 Governor of Kogi state, Yahaya Bello has stated that Nigeria’s democracy is still “shaky and tottering along like a toddler” 22 years into the 4th Republic.

This was made known by the governor while speaking on Friday at the Goodluck Jonathan Foundation’s policy dialogue in Abuja.

The governor said to achieve a viable democracy in the country, interests must not be sectional.

Yahaya said Nigerians must focus on how to make democracy work as a united entity rather than a divisive nation.

“Unity is the primary hypothesis on which democracy stands in any state which has chosen it as the form of government,” he said.

“This is because in a functional democracy, the people, in spite of their diversity in ideology, faith, tribe and politics, have to always unite in a majority for most things to happen in the society, including leadership.

“Consequently, we hardly speak with a united voice on anything as a nation. This state of affairs makes me believe that we need more democracy, not less.

“Of course, by more democracy I mean the real essence and practice of democracy, that pure marriage of consensus which enthrones the overall public good rather than any sectional or parochial interest.

“With the foregoing in mind, I say that how to make Nigerian democracy work for us as a uniting factor rather than the divisive measure we have turned it into is the most pressing need of the season, especially as gladiators begin to take position for 2023.

“I declare that one Nigeria must quickly come to mean more than it currently does to the average citizen or we risk losing more than we bargained for – as leaders and those being led.”

He said a united Nigeria is not one where people are marginalised because of their tribe or religion, but a nation that guarantees all citizens security, unity and peace.

“It must be equitable and allow everyone to thrive on his own merits. Tribe, religion and class must not be used to discriminate against or marginalise anyone and civics must encourage cooperation and integration as a cardinal tenet of citizenship,” he said.

“We have to start substituting place of residence for state of origin and finding ways to immediately and brutally punish corruption in private and public spheres.

“Our local job markets must deliver jobs to people at their levels of learning, skills and experience. The nation must have economic stability and be a family-friendly place where parents can raise the next generation well.

“We will require income equality, especially across the genders. A united Nigeria will thrive on political stability and social security. It also goes without saying that the quality of the public education system and that of the public health system must be high.

“Both must deliver free to affordable services. It is only then that people will belong because they want to, not because they must.”

Bello said through his leadership, Kogi has been able to achieve progressive ideals, adding that they are worth replicating on the federal level.