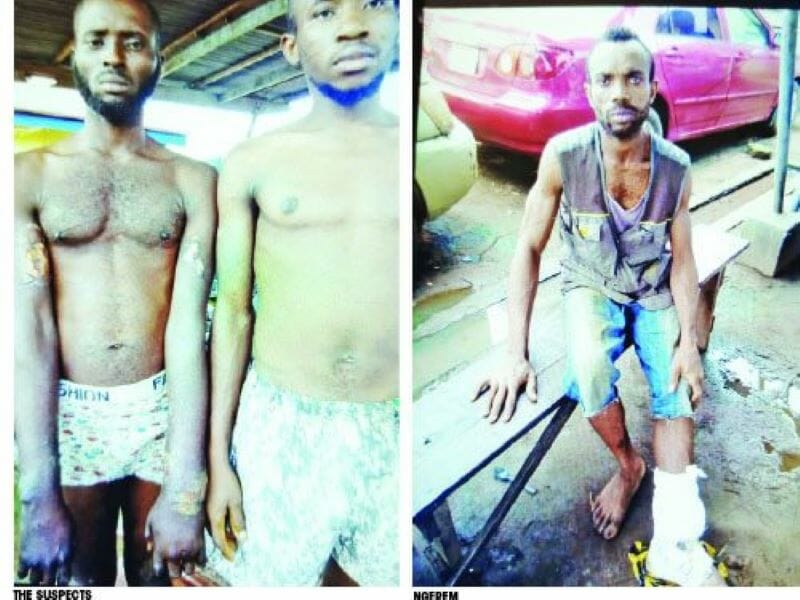 A suspected kidnapper, Osinachi Ngerem, who was recently arrested by the Anti-Kidnapping Squad of the Imo State Police Command, has been telling the police why he enjoyed abducting married women and collecting large sums as ransom from their families.

The 41-year-old suspect was arrested alongside a fellow suspect, Ugona Franklin in October 2021, when police raided their hideouts in Mbaise axis, where the kidnappers always kept the female victims.

Among their victims are Mrs Ngozi Njoku, Mrs Ifeanyi Obi and Mrs Mary Christiana. The women were kidnapped around Ezlama Ahazu in Mbaise Local Government Area of Imo State. The duo collected N10 million as ransom from their families before freeing the women.

The State Commissioner of Police, Hussanni Rabiu said the notorious kidnappers were members of a five-man gang that had a penchant for kidnapping married women. Their reason? It was always quite an easy job to collect good money running into millions of naira as ransom from their husbands.

CP Rabiu said the suspects had been involved in several kidnapping activities in various states like Imo, Anambra and Enugu states.

He said that in November 2020, the five-man gang had kidnapped one Mrs Ifeanyi Obi in Awka, Anambra State.

“She was kidnapped and taken to their hideout in Ngor Okpala. The husband of the victim was called and they demanded N20million ransom. They negotiated and he paid N2 million. The victim was in their custody for three days before she was released.

“In January 2021, the same gang kidnapped one Mrs Mary Christiana along Miles 2 in Enugu. She was thereafter taken to their hideout, where they demanded a ransom of N5million. The victim’s relatives pleaded for the freedom of the woman, but to no avail. They had to pay N1million before she was released after spending five days in their custody.

“Meanwhile, in March 2021, the same gang kidnapped one Mrs Mary Christiana who was kidnapped in Onitsha, Anambra State. She was kidnapped within her residence. She was dragged into their vehicle. They asked the victim to call her husband to send money to them. They demanded N10million ransom. Later, the victim’s relatives transferred N500,000 through P.O.S to the kidnappers and the victim was released.”

CP Rabiu added that luck ran against the suspects when the Anti-kidnapping Commander, Supol Oladimeji Oyeyiyewa and his operations team swung into action and arrested the main suspect, Osinachi Ngerem on August 18, 2021 around 6:00pm. That was after the victim had allegedly

kidnapped one Mrs Ngozi Njoku along Eziama Ahazu in Mbaise Local Government Area of Imo State. They rescued the victim and paid N2.5 million to the kidnappers after the kidnappers had demanded N5 million ransom. During their encounter with the police operatives, two of the suspects were arrested while others escaped from the scene of the crime. “A locally made pistol, pump action gun and cartridges were also recovered from the suspects,” he said..

In a interview with The Sun, Ngerem explained why he had been enmeshed in a life of crime. His words: “I hail from Ihitti Ubi Isiala, in Mbaise Local Government Area of Imo State. I started as a barber. Later I started selling drugs and Indian hemps. It was later that we formed a gang of kidnappers on August 18, 2021. I participated in the kidnap of one Mrs Ngozi Noku along Ezianna Ahazu Mbaise L.G.A Imo State. We took the victim and kept her in my brother’s house. One Collins Okechukwu hired a vehicle for us and supplied us two pump action guns and a locally made pistol.

‘We demanded N5 million from the victim’s relatives and they paid N2.5 million. The victim spent five days in our custody before we released her. My own share was N500,000 before the Anti-Kidnapping operatives intercepted us. We had a gun duel and had injuries along Oboh road while my other gang members escaped with bullets wounds in the bush,” he said.

The other arrested suspect, Ugonna Franklin, said “I was involved in several kidnappings and all our victims were females. The gang leader always transferred money to me whenever I joined them for operations. I do collect motorcycles which we do use for our operations before the vigilante group arrested me in October 2021 after I had escaped from an operation. I was arrested with another gang member, Okonkwo Arinze a.k.a Smart. We robbed victims of their belongings, especially the ladies and collected N42, 000 from one victim after threatening her.”

The Anti-Kidnapping Commander, Mr Oladimeji Oyeyiyewa, in his explanations said: “In October 2021, we raided all the hideouts of kidnappers in Mbaise axis where the kidnappers always kept the female victims and we recovered some pump action, Ak47 rifles and 100 rounds of cartridges from them. We still arrested another four suspects who were involved in female kidnapping in Mbaise and we appreciate the vigilante group for assisting us. The four suspects have confessed on how they kidnapped female victims.”

CP Rabiu stated that the suspects will soon be charged to court after the conclusion of investigation.