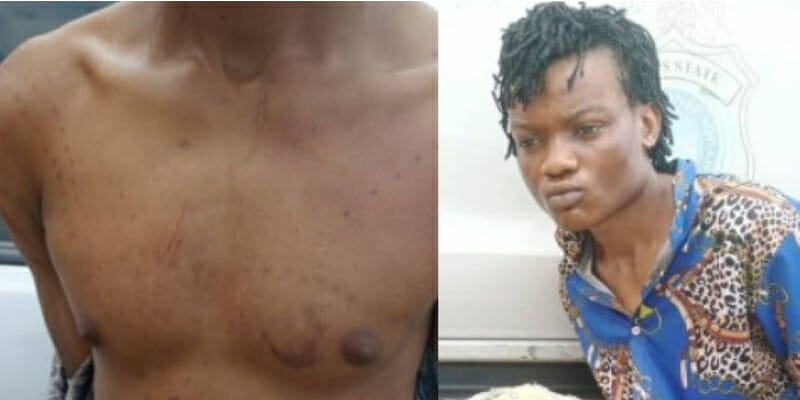 A traffic robber, Samuel Adetomi has disclosed that his father fortified him with charms before he left his hometown, Abeokuota, the Ogun state capital for Lagos.

The 18-year-old convicted robber was arrested by the Decoy Team of Rapid Response Squad (RRS) in a sting operation around Otedola Bridge and Ojodu-Berger, last week Friday, November 26.

Adetomi was in the company of about four other suspects, trying to rob a motorist when he was arrested. While his three other colleagues who sighted the plain cloth officers on time escaped, Adetomi couldn’t make out of the scene on time, hence, his arrest.

It took more than six policemen to subdue and handcuff him at the scene. When interrogated, he revealed that he sells bottled water in traffic and robs at night, adding that he sleeps under Ojodu – Berger footbridge at night.

He added that the several diagonal incisions all over his body as well as the ring found on his toe were part of the fortification with charms his father made him go through before leaving Abeokuta for Lagos.

The operation was part of the festive period’s sting operation ordered by Commander, Rapid Response squad (RRS), CSP Olayinka Egbeyemi in selected spots within the metropolis, to stem the incidences of traffic robbery.

CSP Egbeyemi while re-echoing the directives of Commissioner of Police, CP Hakeem Odumosu noted that more security strategies would be deployed to reduce crime during the festive period. Recovered from him were charms and hard drugs.

Adetomi, who was transferred to the court for prosecution on the order of the Commissioner of Police, was sentenced to four months imprisonment.