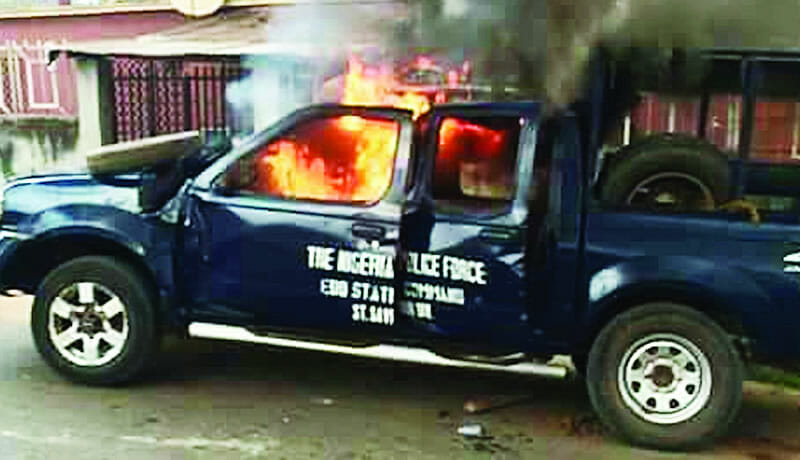 Beheaded policemen in Anambra: Police have not told us what happened to our father – Victim’s family

Blessing, daughter of Inspector Emmanuel Akubo, one of the policemen, who were beheaded and burnt by suspected members of the Indigenous People of Biafra, IPOB, in Anambra State last week, has expressed displeasure over police silence since the horrific sight went viral on social media.

WITHIN NIGERIA had reported that gunmen ambushed, killed and burnt the officers travelling with their colleagues.

The family said no representative of either the Lagos State Police Command, where Okubo served or the Zone 2 Command, Onikan, which oversees the Lagos State Command had visited any member of the bereaved family to formally break news of killing of their bread winner.

Late Okubo, who hailed from Dekina Local Government Area of Kogi State and attached to the Patrol and Guard Unit of the Lagos State Police Command, according to his family, travelled to Anambra State as an escort to the Chief Executive Officer of the Young Shall Grow Motors, Chief Amaechi Obianodo, last week Wednesday.

According to Vanguard, the deceased’s first daughter, Blessing, said apprehension set in the next day (Thursday), after efforts to reach him on his mobile telephone proved abortive.

Blessing said: “My father left for work as any father would, to provide for his family. He travelled to Anambra as a police escort to the CEO and owner of “The Young Shall Grow Motors,” Chief Amaechi Obianodo, on Wednesday, November 24, 2021.

“When he got to Anambra, he called to inform us he had arrived. The last person he spoke with on Wednesday night was my younger brother, Akubo Moses, about 7p.m., and they discussed about his school.

“On Thursday morning, my dad’s lines were switched off, which was unlike him as he usually called almost every three hours daily when he was at work or at home. He was that caring to his family. Because this had never happened before, my mum was really worried but I kept calming her down, saying the network in the village was probably bad, which was why we could not reach him.

“On Friday, I was at work when I got a call from my mother. She was crying. She said my dad and other escort policemen were kidnapped on their way to the airport to pick Young Shall Grow transport boss. I left the office immediately to Ogun State, where our family house is to meet my mother. Friday passed without any news from the Police. My uncle in Abuja was the only one calling to give us any information he got on the matter.

“On Saturday morning, my younger brother went to my dad’s office at the Lagos State Police Command to get some information regarding the kidnap but it was not open because it was a weekend. So, the whole family decided to wait till Monday. Unfortunately on Sunday morning, news reached us that my dad and his colleagues were ambushed and shot at. Few of them escaped but my dad and two others were injured and couldn’t run. They were caught and my dad was slaughtered and the barbaric act was recorded by the killers.

“On Monday, November29, 2021, my younger brother, Moses Akubo and some of my dad’s friends (also Police officers) went to lodge a complaint on the matter.

“They met with the unit head, SP Amanda and his assistant, DSP Comfort, who acknowledged that my dad and members of his team were sent on a special duty to Anambra but that they were yet to hear from them. They said they were still on duty. During this meeting, my dad’s friends showed them the video clip of how the officers were murdered but she denied that my father wasn’t the one in the video.

“Later in the evening, a press statement was released by the office of the Minister of Information and Culture confirming that my dad was one of the policemen murdered in the video by IPOB/ESN. His name and Force number were disclosed in the released statement.

“The video of my dad being killed was released and the police that sent him on that duty are yet to admit he is dead. If they are taking this long to confirm his death, I wonder how long it will take them to find the perpetrators and bring them to book.

“Even Chief Obianodo that demanded police officers as escorts has kept mute on this matter. We haven’t heard from him. My dad’s motorbike is still parked in Chief Amaechi Obianodo’s compound in Ikoyi, Lagos, where he had hoped to pick it when he comes back.

“The death of my dad has brought so much pain to the family and we demand justice. My mum hasn’t been herself since Thursday last week. The news has left her shattered. She is a shadow of herself.

“Late Inspector Akubo Emmanuel was an honourable police officer who didn’t deserve to die that way. He left behind five children: Akubo Samson, Akubo Blessing, Akubo Moses, Akubo Favour and Akubo Precious. We are pleading that all hands should be on the deck to bring the perpetrators to book,” she added.