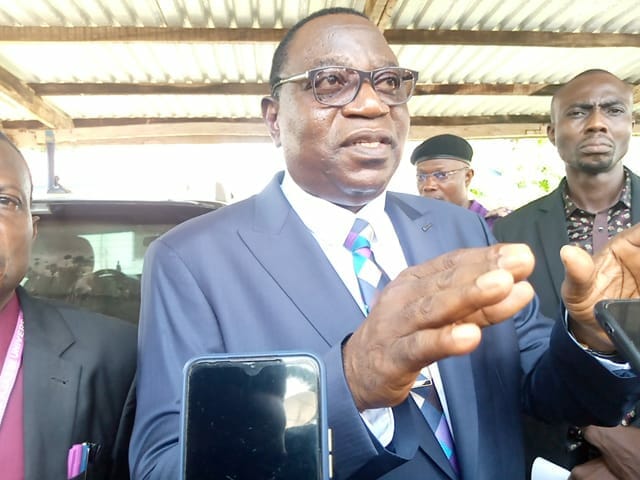 The Vice-Chancellor of Adekunle Ajasin University, Akungba-Akoko (AAUA), Professor Olugbenga Ige, has confirmed that the resumption date for the continuation of the 2020/2021 first semester academic session was to be determined by the institution’s Senate board.

Ige made this known while speaking with campus journalists at the institution senate building shortly after his speech at the 10th and 11th convocation ceremony held at Olusegun Obasanjo Multipurpose hall (OBJ) on 11th of December, 2021.

He added that the amount for the reparation fees will also be determined by the institution’s senate board.

“When students destroy school properties, the same students are still coming back to repair it. The students are only putting an additional burden on themselves by going the extra mile in destroying properties in the name of protest”, he added.

Ige noted that he believed that those who destroyed the properties were not students of the institution, noting that AAUA students are known to be calm and law-abiding.

The Vice-Chancellor, however, urged the entire students to always maintain calmness in all their endeavors as violence solved nothing, but added to it.

Recall that the Vice-Chancellor has earlier condemned the students’ action that led to the vandalisation of some properties within the school premises.

Ige made the condemnation while assessing the level of damage done to buildings and other properties on Thursday 25th of November, 2021, which he described needless and unfortunate.

“The University Management had acceded to the pleas of Student Union leadership to suspend the ‘No Registration, No Examination’ policy of the Institution before the ugly incident”

“The institution did not expect the level of destruction from the students because ever since his administration came on board, the interest of students has been very central in their governance structure.” He said

It could be recalled that on 22nd of November, students of institutions in their thousands trooped out en masse to protest against the management policy of ‘no school fees no examinations’ as the first semester examinations kicked-off with GST

It was gathered that the angry students broke the big gate of the institution which had been shutdown since January 24th, 2021 due to an accident which claimed lives of students and indigene. They equally blocked the highway restricting traffic flow to Akure and other parts of the state.

During the protest that lasted for over 6 hours, some of the students were seen carrying placards, burning tyres, holding sticks, throwing stones, sachet waters, knockout(bangers), while singing Aluta songs.

Within Nigeria also recall that before protesters moved their agitation to the senate building which houses the registrar, Vice-Chancellor, Public relation officers and other administrative officers, the angry students had earlier turned off the generator that powered the CBT center while the GST examinations (communication in Arabic, GST123B and communication in French, GST123A) were ongoing.