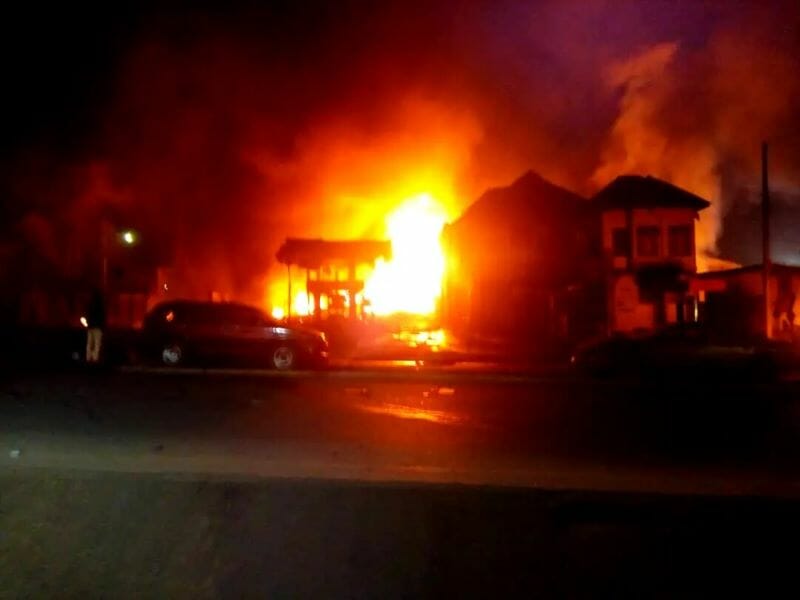 “Extent of damage, casualties yet unknown” – Police speaks on petrol station engulfed by fire in Onitsha

More details concerning a gas station located in Onitsha which exploded and resulted into the injury of many persons have emerged.

WITHIN NIGERIA had earlier reported that many have been feared injured following the explosion that rocked a gas station located around Akwa road in Onitsha, Anambra state.

It was learnt that a petrol station near Boromeo roundabout in the commercial city of Onitsha, Anambra also engulfed fire on Sunday evening.

Speaking on the tragic development, a resident who witnessed the sad incident said that a petrol-laden tanker exploded and burst into flames while waiting to have the fuel discharged.

According to the eye witness, heavy traffic on Awka Road in the city delayed the arrival of fire fighters who later battled to contain the raging inferno.

He said that police personnel attached to the Inland Town Divisional Headquarters, Onitsha, had arrived the scene and cordoned it off to prevent hoodlums from taking advantage of the incident to loot.

Ikenga said preliminary investigation revealed that the truck caught fire inside the fuel station while awaiting to have its content offloaded.

He said the cause of the explosion, extent of damage and number of casualties have yet to be ascertained.