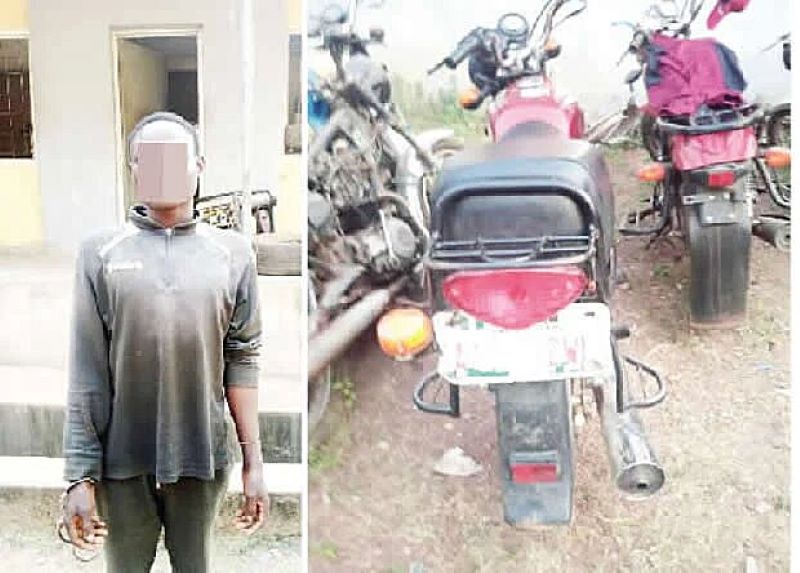 24-year-old Hussaini Abdulsalam has been arrested by operatives of the South West Security Network, otherwise known as Amotekun Corps for allegedly stealing a motorcycle in Ijebu-Ode, Ogun State.

The Field Commander of Amotekun in the state, David Akinremi, who disclosed this in a statement on Thursday said the suspect, alongside another member of the gang, now at large, had hired a commercial motorcyclist to take them to a hotel within Ijebu-Ode metropolis, but in the process, the duo reportedly became friendly with the motorcyclist.

Akinremi said the two suspects allegedly offered the motorcyclist a drink that had been drugged, which he took and became drowsy.

Abdulsalam and his runaway accomplice reportedly took the bike and disappeared.

The Amotekun Field Commander said Abdulsalam was arrested following a credible intelligence, linking him to the alleged crime.

“The said motorcycle was stolen in Ijebu-Ode by a two-man gang who hired the rider to take them to a hotel in the town. The two men became friendly with the rider and offered him a drink unknown to him that the drink had been drugged.

“The rider, having taken the drink, became drowsy. Consequently, the suspect took away the motorcycle.

“However, based on credible intelligence, the motorcycle which registration number has been changed to OGUN AAB 252 WI was traced to the above named suspect, Hussoni Abdulssalam in Saba Area of Sagamu. The suspect who claimed to be a mechanic alleged that the motorcycle was brought to him for repairs but could neither give the name of the so called customer nor his address.”

Akinremi, a retired Commissioner of Police, said the suspect has been handed over to the Police Headquarters, Eleweran, for further investigation and prosecution.