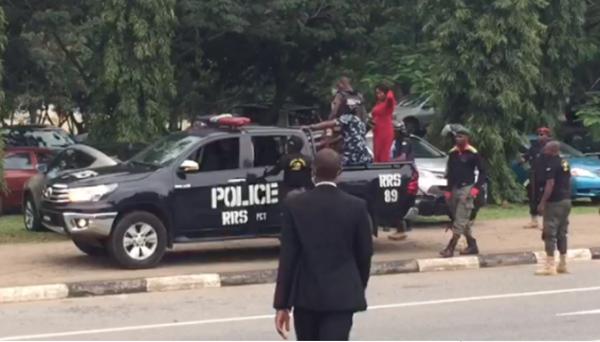 On Tuesday, the Ebonyi State Police Command failed to arraign Nwoba Chika Nwoba, the PDP’s Publicity Secretary, who had been arrested and detained since Sunday.

Nwoba was allegedly kidnapped by thugs suspected of being loyal to government officials, but was freed by the police.

WITHIN NIGERIA learned that the suspected thugs were not arrested by police but the victim, Nwoba was taken into custody for the alleged circulation of fake news.

Meanwhile, Nwoba was brought to the Magistrate Court 2 sitting in Abakaliki by a team of armed Policemen in a white van around 4pm Tuesday.

After spending about 20 minutes in the court premises he was driven out of the premises by the policemen.

Nwoba’s Lawyer, Luke Nkwegu, who spoke to him briefly through the window of the van told reporters that the Publicity Secretary complained of having severe health challenges as a result of the beating he allegedly received from those who arrested him.

He lamented that Mr Nwoba is having serious eye problems due to the beating he received before he was rescued by the Police and subsequently arrested.

It was gathered that the Police brought him to the court to enter his charges and notify the court that he is in their custody.

In a related development, an eyewitness and State Deputy Chairman of PDP, Ifeanyi Nworie, who was with Mr Nwoba when he was arrested had accused the Ebubeagu operatives of beating him up after which they bundled him into their car.

Mr Nworie, who is a Lawyer, alleged they planned to take Nwoba away but for the arrival of the Police who he had notified.

He said the Police thereafter took him away to the Police station where he was denied access to his Lawyers, Doctors or any visitor.

But Stanley Okoro Emegha, who is the State Consultant on Security denied that the Ebubeagu Security Outfit members beat up Nwoba.

He said they only arrested him in a professional manner and promptly handed him over to the Police to face charges bordering on fake news circulation.

Hé said Nwoba has been having free access to visitors who have been coming to see him all day at the station.

“No one is infringing on his right to seeing his visitors. If the Lawyers still want to see him, they should come now and they will see him”.

He noted that Mr Nwoba was not arraigned today because the Magistrate has closed for the day adding that he will likely be arraigned tomorrow.