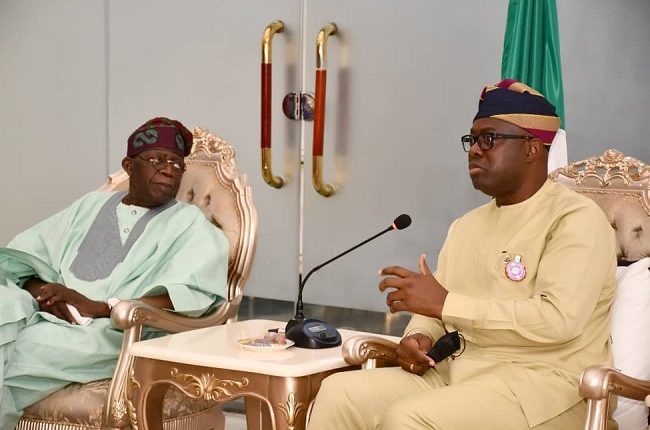 Ahead of the 2023 election, Oyo State Governor, Seyi Makinde, has emphasized on the need to ensure that the best candidate emerges as the next president of Nigeria.

Makinde made the disclosure when All Progressives Congress (APC) National Leader and former Lagos State governor, Bola Tinubu visited him at Government House, Agodi, Ibadan, to condole with him over the deaths of the Soun of Ogbomoso land, Oba Jimoh Oyewumi; the Olubadan of Ibadan land, Oba Saliu Adetunji; and former governor Adebayo Alao-Akala.

Speaking, Makinde stressed that all and sundry must rise above politics and be keen on wanting the best for the country.

He stressed that irrespective of the struggle for political positions, God was the only determinant of who gets power and at what time the person will get power.

He noted that Tinubu’s visit to the Government House had shown him as one who preaches politics without bitterness, and wished the former Lagos governor the best in his quest to be President.

Makinde, especially, praised Bola Tinubu for not minding their differences in political leanings and visiting him and the state in the time of its grief.

Makinde said: “We may struggle for political positions but power can only come from God and he gives it to whom he will give it to at whatever time.

“We have taken proper notice that you have risen above politics to share with us at this moment we are grieving.

Let me use this opportunity to wish you well in your political quest to govern this nation.

“We want the best for this country and only the best is good enough for us at this particular time.

“We are grateful for this visit because this is a political season because this year, most political parties will elect their candidates towards the election coming on next year.

“So, what this has demonstrated to us is that you stood for politics without bitterness. Because this is a political season, you might have said why do you need to come to the Government House as people may have interpreted it politically, but you sent a message across to me and I was delighted to host you at the Government House.”

In his remarks, Tinubu noted that the lesson from the deaths of the three prominent Oyo citizens, in quick succession, is the need to add value while alive.

He noted that the Soun, Olubadan and Alao-Akala, in different ways, contributed to the stability, peace, love and development that radiates in the state.

Tinubu especially appreciated Makinde for demonstrating good character in accepting to host him within a short notice.

He explained that the appreciation is against the backdrop of the fact that people in power sometimes get intoxicated with power and are arrogant in office.

Tinubu said, “Thank you for being accommodating, we gave you a short notice and you responded. That is a demonstration of a good character.

“It is rare in this world. People sometimes get intoxicated with power and the arrogance of office can be overwhelming, but not with you. It is good that we are able to be here not on politics.

“We all appreciate your feeling and share your grief with you. May their souls rest in peace. May Oyo State continue to grow in leaps and bounds.”

Tinubu’s presence in Oyo State saw him visit the homes of the late Soun, Olubadan and Alao-Akala, as well as that of Senator Rashidi Ladoja.