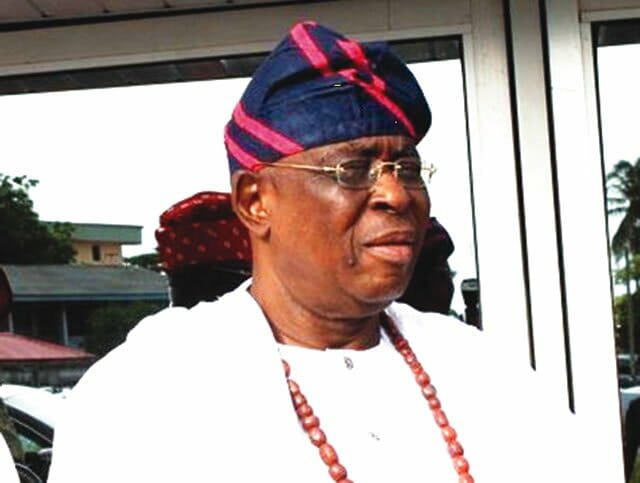 Chief Olusegun Osoba, a former governor of Ogun state has narrated how he was allegedly defrauded of victory in the 2003 governorship election in the state.

Osoba, who contested on the platform of the defunct Alliance for Democracy, was defeated by the Peoples Democratic Party candidate, Otunba Gbenga Daniel, but he alleged that the results of the election were manipulated.

Osoba said he knew he would lose the election following last minute reports from security agencies.

According to Osoba, the results had been fabricated even before the poll.

He said despite knowing about the conspiracy to rig him out of office, he still caved in to the advice of his followers and shared N140m to the electorate on the eve of the election.

Osoba made the revelation at the book launch and 60th birthday of his former Chief Press Secretary, Kayode Odunaro, in Abeokuta on Wednesday.

The former governor while commenting on the book titled, ‘Colour of Perception – An Autobiography’, stated, “I was warned; the electoral officer from Cross River State had told me after the presidential election, ‘Chief, don’t contest the governorship election; it is concluded’, but I said no.

“The 2003 election I put it behind me many years ago; 2003 is bygone whatever happened; although in his (Odunaro’s) book, he concluded that I refused to go to court; yes, I did because the evidence was too much and he alluded to some of the evidence, but let’s forget about all that; it is gone and Ogun State people have had the chance to compare and contrast, and they have given their conclusion and that is private to everybody.

“Some of the security people had given me the result that they were going to announce and I knew he was referring to me spending money and some people taking my money to sleep in hotels; they pocketed the money; I knew because in politics, you must learn to na ina ku na (engage in wasteful spending) and you must learn to buy all kinds of lies; that is all part of politics.

“We shared N140m on the eve of the election and I knew it was wasted money, but I shared it because if I didn’t share it, they would say if I had given them money, they would have won.”

The former governor described the author of the book as a courageous man, who was dedicated to his job as a journalist.

He noted that Odunaro came to him when he emerged as governor in 1999 as a stoic journalist, saying pressure from the political class in his native Yewaland forced him to drop him as his CPS.

Osoba, who recalled how Odunaro defended his administration against the campaign of calumny by his successor, even at the expense of his life, praised him for being loyal and upright.

The former governor, however, said he disagreed with some aspects of the book, particularly the events that surrounded the 2003 general elections, adding, “Odunaro was just being dodgy; he didn’t want to offend anybody.”

Earlier in his welcome address, Oduanro explained that he decided to write the autobiography to expose his work experience to the world, particularly the up and coming journalists and media managers.

Odunaro announced the donation of copies of the book to all libraries and tertiary institutions in the state.

While reviewing the book, a renowned columnist, Dr Festus Adedayo, said the 318 pages and 38 chapters offered different colours of the life and service of the author.

Adedayo submitted that the book was beyond a biography, but a historical rendition of military and civilian administrations.