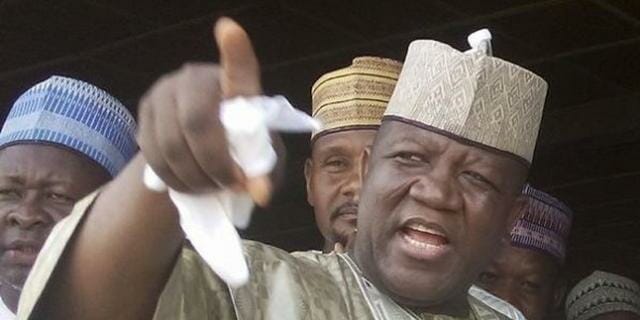 National chairmanship aspirant of the All Progressives Congress (APC), Dr. Sani Abdulahi Shinkafi, has declared that former Governor of Zamfara State, Abdulazeez Yari, who is aspiring for the position is technically not qualified to be in the race.

Shinkafi also debunked claims of APC factions in Zamfara State. He said Yari cannot be a threat to his ambition to lead the party as he is not a card carrying member of the party.

Speaking in Abuja after he declared his ambition to lead the party, Shinkafi said: “I am in the race because I know that I am eminently qualified to lead the party at this period of its development and not to act as a lackey for anybody. I want to state categorically that Abdulazeez Yari is technically disqualified to run for the leadership of the APC having failed to register in the just concluded revalidation exercise so having failed to register he is not a card carrying member of the party.

“With my wide experience as the immediate past national secretary of the All Progressives Grand Alliance (APGA) and immediate past secretary of the Board of Trustees of APGA, I believe that I have what it takes to pilot the affairs of the APC and take it to greater heights. I have been in the service for several years. I resigned honourably to join politics and engage in business. I am a seasoned technocrat who knows what it takes to manage human and material resources.

“It is my hope that if and when elected as national chairman, we will reposition and reorganise the party based on its philosophy of social democracy which basically means people oriented, membership mobilisation and recruitment and mass based political organisation. To be able to actualise these into concrete action that visible and verifiable under our national leadership, we will have to do a couple of things differently in the day-to-day management of the party affairs, while inter facing with all those elected on the platform of the party at all levels,” he said.

In his reaction, Yari assured his supporters that his APC membership card is intact, contrary to the claim by Shinkafi.

In a statement by Yari’s Campaign Group and his Chief of Staff, Abdullahi Abdulkarim Tsare, he described Shinkafi as political nuisance.

“Ordinarily, Yari, wouldn’t have to join issues with the likes of Shinkafi but for the consumption of our great party members and the general public and also to set the record straight.

“Shinkafi is nothing but a nuisance and a witch-hunting dog and there was never a time Abdulaziz was a friend to this errand boy of some disgruntled elements. Therefore, his pay masters should come out so that Yari, can face them one on one.

“Where was Shinkafi, when Abdulaziz contested elections from a State party Secretary to the exalted office of a Governor, a two-term governor for that matter.

“We urge the public to ignore the chanting of an errand boy who will stop at nothing to cause confusion in the public, simply to mislead the teaming supporters of Yari, and to further attract large sum from his pay masters. He is not serious in the race of being the National Chairman of our great party, APC.

“Shinkafi, was in the All Progressives Grand Alliance (APGA) throughout the 16 years period of PDP rule; for that period, he was just a nuisance in APGA because he caused a lot of trouble and I believed the APGA as a party is in a better position to give detailed account of what Sani Shinkafi represent.

“If not, why should anybody explain to the public that someone who was a governor did not have a membership registration of the party he worked so tirelessly to form, and during that period, Shinkafi was in APGA. It was when Matawalle defected that he Shinkafi joined his pay masters. For the avoidance of doubt, Abdulaziz Yari is a party man.

“He is a registered member of the APC with his membership Card obtained by him. He is the Only known chairmanship aspirant coming from Zamfara in particular and the North West geo-political zone; the party and general public should disregard any noise maker claiming to be an aspirant under the umbrella of APC,” he noted in the statement.