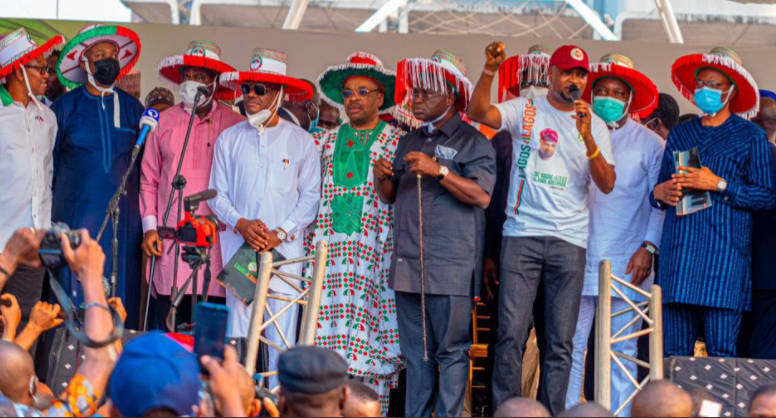 The People Democratic Party (PDP) has officially received some members of the Lagos4Lagos movement, a group affiliated with the All Progressives Congress (APC) to the party.

The group was received by Iyorchia Ayu, national chairman of the party, Seyi Makinde, governor of Oyo, Nyesom Wike, governor of Rivers among other chieftains at a political rally in Lagos on Friday.

According to a tweet on the verified Twitter page of PDP, the party “received thousands of defectors” from the APC group.

“Earlier today, the National Chairman of our great party, Dr Iyorchia Ayu, other members of the NWC, PDP Governors, etc., received thousands of defectors from the Lagos 4 Lagos movement to the PDP,” the tweet reads.

#Lagos4Lagos: Earlier today, the National Chairman of our great party, Dr. Iyorchia Ayu, other members of the NWC, PDP Governors, etc, received thousands of defectors from the #Lagos4Lagos movement to the @OfficialPDPNig at a rally organized by the party in Lagos State. pic.twitter.com/dZUXr0iqnj

“Today, we are happy to join Lagosians to welcome Abdulazeez Olajide Adediran to the PDP so that together, we can rescue Lagos State and rescue Nigeria from the throes of economic hardship,” Ayu said.

In December, members of the Lagos4Lagos movement voted to move to the PDP.

Speaking on the defection, Saraki, in a thread of tweets on his verified Twitter account, expressed excitement over working with Adeniran “to deliver victory for our party in Lagos State.”

“It felt great to witness the electric atmosphere earlier today at the Tafawa Balewa Square and see the great people of Lagos State come out to show their unwavering support as the Lagos 4 Lagos Movement joined the PDP,” he tweeted.

“I welcome Dr Jide Adediran to our party, and I am excited to work with him to deliver victory for our party in Lagos State.”