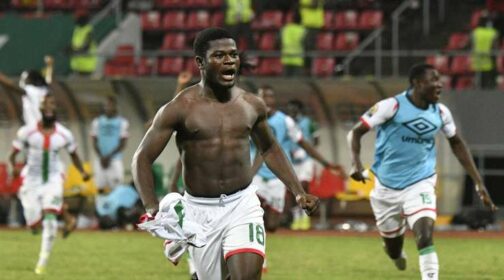 Burkina Faso advanced to the quarter-finals of the ongoing African Cup of Nations in Cameroon after defeating Gabon 7-6 on penalties.

After 120 minutes, the score was 1-1, necessitating a penalty shootout, which the West African side won.

Ismahila Ouedraogo scored the game-winning penalty for Burkina Faso, placing the ball into the right side of the goal past Jean-Noel Amonome’s outstretched arm.

Lloyd Palun missed Gabon’s last penalty as he smashed the ball against the crossbar, after which Ouedraogo stepped in to give Burkina Faso the lead.

Before duration time, Burkina Faso had opened scoring on 28 minutes through Bertrand Traore.

He got to the ball and unleashed a strong shot from distance. It turned out to be a good decision as his effort found its way into the bottom left corner.

On 67 minutes, Sidney Obissa made a bad challenge and received a second yellow card from Jiyed Redouane and was sent off.

Gabon equalised on added time after Adama Guira’s own goal, as he deflected a shot into his own net.