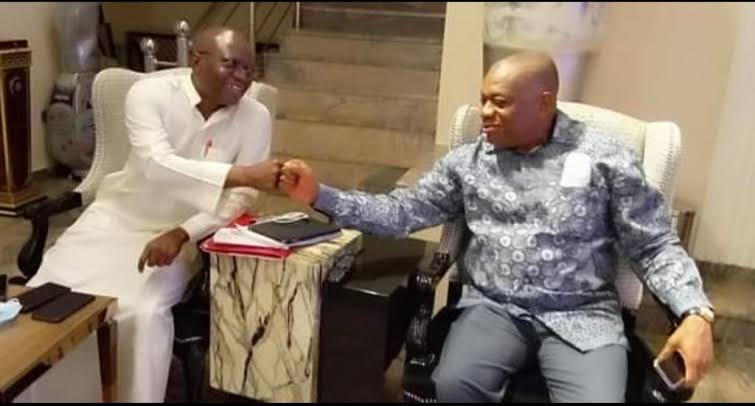 Ahead of the February 26 National Convention of the All Progressives Congress, APC, the Majority Whip of the Senate, Senator Orji Uzor Kalu has paid a visit to the Chairman, Senate Services Committee, Senator Sani Musa, APC, Niger East.

The former Governor of Abia State and a Presidential aspirant on the platform of the APC for the 2023 Presidential election visited Senator Musa, a frontrunner in the APC National Chairmanship position Sunday night at the Maitama, Abuja residence of the Niger East Senator.

Aside politics, the visit of Kalu to Senator Musa was also to check him on how he was health-wise against the backdrop that the Niger East Senator returned to the country last week after he travelled out for medical attention.

During the visit, both Senators Kalu and Musa brainstormed on how to improve the fortunes of the party, the party’s coming national convention and the way forward for a successful APC at all levels.

Kalu praised Senator Musa for being very proactive and in his pursuance of ways to move the APC to electoral victories in all elections, just as he described him as a positive and very purposeful personality who has the zeal and passion to lead the party to victory in 2023.

The former Governor told the Senator of his plans to aspire for the Presidency of Nigeria if the position is zoned to the South by the APC.

In his remarks, Senator Musa who thanked Senator Kalu for the visit prayed for continued good and sound health for everyone in their various pursuit towards the growth and development of the party and Nigeria as a country.

Senator Sani Musa expressed appreciation to the Senate Chief Whip for his humility and responsiveness.