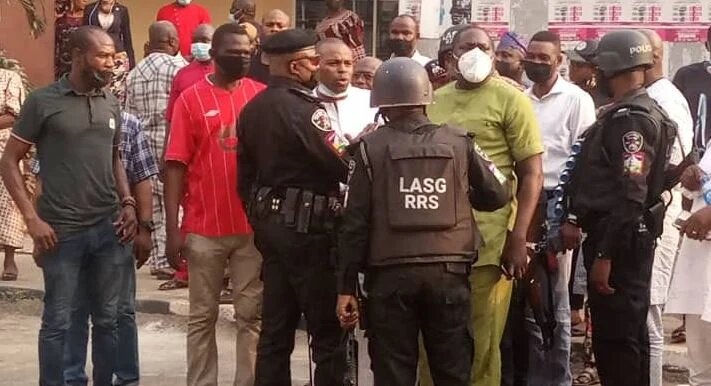 Prominent members of the National Union of Road Transport Workers in Lagos state, Kunle Poly and Sego have been arrested by operatives of the Rapid Response Squad over the recent Idumota crisis.

According to PUNCH, the Rapid Response Squad led by its Commander, CSP Olayinka Egbeyemi, arrested the NURTW leaders on Monday.

WITHIN NIGERIA had reported that the incident began last Thursday night and spread to Friday morning, with hoodlums seen with dangerous weapons, such as cutlasses, guns, fighting themselves.

Some people were feared killed in the gun-battle. Areas such as Idumota, Kosoko, Oluwole, Martins and Balogun were deserted as street urchins engaged in bloody clash.

The Police said Kunle Poly and Sego are principal suspects in the recurring clashes in Idumota and its environs, which had intermittently crippled commercial activities in the area.

“The arrest was effected today at a meeting where the two NURTW members along with some other stakeholders converged,” RRS said.

“Kunle Poly and Sego are currently being transferred to Zone II, Onikan, Lagos.”