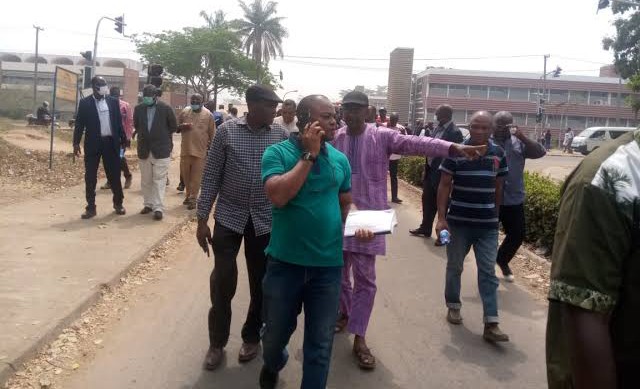 The Academic Staff Union of University (ASUU) on Thursday gathered at the Obafemi Awolowo University (OAU) Ile-Ife campus to hold a peaceful protest against the management of the institution for allegedly retaining their Earned Academic Allowance (EAA).

Representatives of the union from Ibadan, Lagos, Benin and Akure zones had stormed the campus in solidarity with their colleagues to demand disbursement of their allowance.

Speaking with newsmen during the protest, the zonal coordinator, Akure zone of ASUU, Prof Olufayo Olu-Olu, said the EAA was fought for by the ASUU and other universities have paid their lecturers since it was released by the government in December.

He said, “since the EAA was paid in December 2021, many Vice-Chancellors did not waste time in paying it to the deserving staff except here in OAU.

“The OAU VC said there are some other groups and we told them we fought for the money. If they are a union, they should register and negotiate for their own. This group you are talking about made efforts to stall our actions.

“Now, the government has yielded and they want to reap where they did not sow. The government said the money was released for ASUU and other unions have their own. We are surprised that the VC of OAU is supporting them and claiming to be member of ASUU.”

The Chairperson of ASUU OAU, Adeola Egbedokun, said there is no going back on strike embarked upon by the union until the management accedes to their demand.

The union also accused the Vice-Chancellor of OAU, Prof Eyitope Ogunbodede, of hoarding the Earned Academic Allowance (EAA) meant for the union and fraternising with an illegal union.

He said, “we have just begun the strike. Some of our comrades from the Ibadan zone, Lagos, Benin and Akure zones, have come in solidarity with us to fight the injustice and mal-administration that we are facing in OAU.

“Let me categorically say that we haven’t seen anything. It is just the beginning of the strike because to us, the vice-Chancellor has declared war and we are going to give it to him and match up with him.

Asked for the reason given by the VC, Egbedokun said, “the only reason is that our VC is a member of an illegal group called Congress of University Academic (CONUA). Each time we had a meeting with the VC, he will be telling us CONUA can not do this and that as if CONUA is a gene.

“The office of the VC should be more responsible in communicating officially to every stakeholder that has something with the university administration.

“I say it to the whole world, no lecture is going on on the campus of OAU. Whatever information that the university is feeding the public are all lies and they are deceiving parents.”

When contacted, the Public Relations Officer of OAU, Abiodun Olanrewaju, described the claims of ASUU as unfounded.

He explained that the university intervened when the two unions could not come to terms with the formula for sharing the money.

He denied the allegation that the VC is supporting CONUA, saying that the VC remains a member of ASUU.