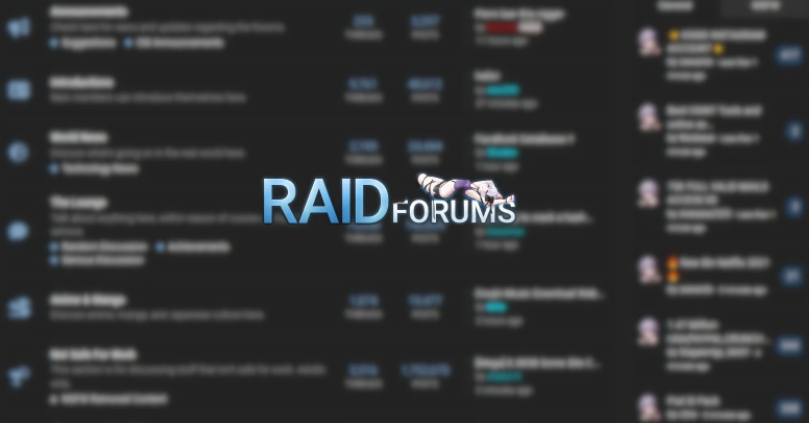 The takedown of prominent hacking website RaidForums was the outcome of an international operation including the United States and European countries.

The platform’s domain, which is mostly used for trading and selling stolen databases, is currently unavailable.

The US Department of Justice announced the seizure of a marketplace where cybercriminals dealing in hacked data meet to conduct business on Tuesday.

Diogo Santos Coelho, the office’s founder and principal administrator, is facing criminal allegations. The 21-year-old is a Portuguese citizen.

Coelho was arrested in the United Kingdom on January 31, after a U.S. request, and remains in custody pending his extradition for trial.

According to court records, the American Government got judicial authorization to seize three domains that hosted the RaidForums website – Raidforums.com, Rf.ws and Raid.lol.

It was discovered that from in or around 2016 through February 2022, the URLs traded sensitive personal and financial information of victims in the U.S and other countries.

Assistant Attorney General Kenneth A. Polite, Jr. said the takedown disrupts one of the major ways cybercriminals profit from the large-scale theft of sensitive personal and financial information.

“This is another example of how working with our international law enforcement partners has resulted in the shutdown of a criminal marketplace and the arrest of its administrator”, the Justice Department’s Criminal Division official added.

Special Agent in Charge Jason D. Kane of the U.S. Secret Service’s Criminal Investigative Division said the probe investigation signifies the dedication of the Service and highlights its partnerships with foreign counterparts.

“This case exemplifies teamwork at all levels of law enforcement to stop these cyber criminals from defrauding citizens of the United States and in our partner countries”, Kane noted.

Assistant Director in Charge Steven M. D’Antuono, FBI’s Washington Field Office, described the seizure of the website as a testament to the strength of the FBI’s international partnerships.

“Cybercrime transcends borders, which is why the FBI is committed to working with our partners to bring cybercriminals to justice – no matter where in the world they live or behind what device they try to hide”, D’Antuono said.

RaidForums members used the platform to offer for sale hundreds of databases of stolen data containing more than 10 billion unique records for individuals in America and elsewhere.

The platform charged prices for membership tiers that offered greater access and features, including a top-tier “God” membership status.

Also sold were “credits” that provided access to privileged areas of the website and enabled members to “unlock” and download stolen financial information, means of identification, data from compromised databases, etc.