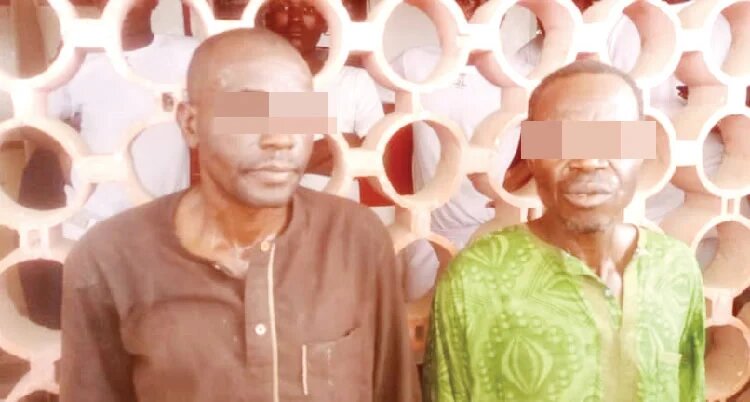 52-year-old Kabiru Abdullahi has been arrested for allegedly kidnapping and killing a five-year-old girl after collecting ransom from her parents in Narabi, Toro Local Government Area of Bauchi State.

The Nigeria Security and Civil Defence Corps, NSCDC, state Commandant, Nurudeen Abdullahi, who disclosed this while parading the suspects said the men kidnapped the child in front of their house and took her to a bridge where they strangled and put her in a sack.

The NSCDC commandant said the suspects took the minor’s body and buried it in Kabiru’s kitchen and thereafter contacted her father, a businessman.

The suspects were paid N150,000 after initially demanding for 1m ransom.

He said, “On April 23, 2022, around 7.30pm, information was received on the alleged kidnap of a five-year-old girl, Amina Abdullahi, at Sabon Gari Narabi, Toro LGA, Bauchi State.

“Preliminary investigation revealed that the prime suspect, Kabiru, kidnapped Amina in front of her house, took her to a nearby bridge, strangled her and put her in a sack.

“He contacted the father of the victim, Yusuf Abdullahi, and demanded a ransom. After a series of negotiations, it was agreed that the sum of N150,000 be paid for her release.

“His accomplice, Alhaji Yawale, collected the sum of N150,000 under a tamarind tree in the bush at Narabi village.

“Further investigation revealed that Amina was killed on April 27, 2022, and buried inside the kitchen of the prime suspect.

“A team of investigators dug the sack from the ground and took the body to the General Hospital, Toro, where she was certified dead by a medical doctor.”

According to him, exhibits recovered from the suspects are the sum of N42,000, fake $200 notes, charms, two MTN SIM cards, different car keys and phone numbers.

He said the suspects would be handed over to the police for further investigation and prosecution.

The commandant said on April 30, 2022, around 4pm, a suspected case of robbery along Diriko village was also reported to the agency.

He said NSCDC personnel attached to the Toro division immediately mobilised to the scene and arrested two suspects: Isiya Lawal (30) and Musa Ado (20).

“Preliminary investigation revealed that the victim, Hamisu Halidu (18) of Tilden Fulani took the suspects on his Bajaj Boxer motorcycle to Dinya village. On their way, the suspects attacked him with a stick and a knife with the intention of killing him and carting away his motorcycle.

“As they were dragging, a good Samaritan came to assist the victim. In the process, the NSCDC arrived and arrested the suspects,” he added.