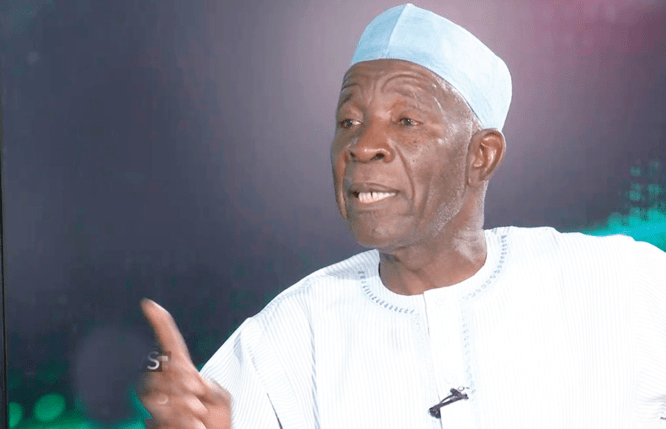 Former member of the board of trustees (BoT) of the All Progressives Congress (APC), Buba Galadima verbally attacked host of Channels TV’s Politics Today, during a live interview programme.

Galadima is one of the founding fathers of the APC and a former ally of President Muhammadu Buhari.

But in the build-up to the 2019 general election, Galadima joined the Peoples Democratic Party (PDP) and became one of the spokespersons of the Atiku Abubakar campaign organisation.

Recently, he joined the New Nigeria Peoples Party (NNPP) ahead of the 2023 presidential election.

Speaking on Channels TV, Galadima said no presidential hopeful can measure up to the credentials of Rabiu Kwankwaso, former Kano governor.

“Senator Rabiu Musa Kwankwaso is the only politician in Nigeria that has got the CV that nobody has among all the flock that are running across the country,” he said.

Asked by Okinbaloye if NNPP has the political structure to win an election, Galadima launched a verbal attack on the presenter, saying he only needs three months to win a fair and transparent presidential election.

“Seun, I think you are losing your brain, somehow. You don’t know me. I only need three months to establish a party and win the presidential election, if there is a free, fair and transparent election. That is my field,” he said.

“We took over the party on March 1, 2022 and INEC said every political party must hold congresses and establish structures before March 31.