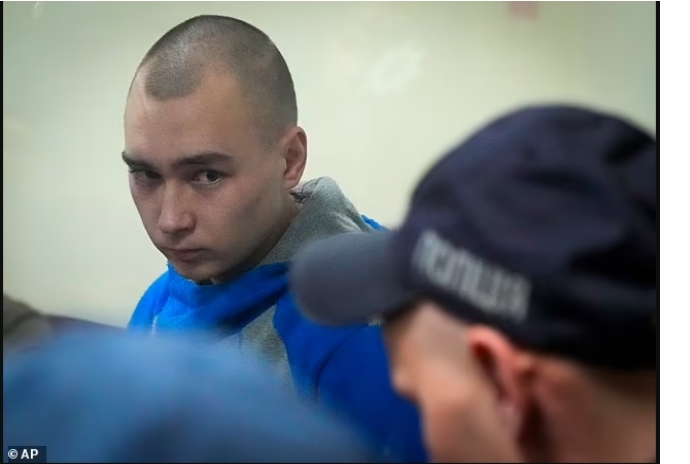 After becoming the first to go on trial in Ukraine over President Vladimir Putin’s invasion, a Russian soldier has pleaded guilty to charges of war crimes

The 21 years old soldier named, Sergeant Vadim Shishimarin, replied ‘yes’ when questioned by a judge in Kyiv today whether he was guilty of shooting a 62-year-old man in the head in the village of Chupakhivka during the first week of the war.

Vadim Shishimarin now faces life in prison under penalties spelled out in the section of the Ukrainian criminal code that addresses the laws and customs of war.

Shishimarin admitted to killing the civilian with a Kalashnikov rifle as he fled with four other soldiers in a stolen car in a village in the Sumy region on February 28, just days after Vladimir Putin ordered his troops into Ukraine on February 24.

The man was pushing a bicycle by the side of the road when he was shot in the head and ‘died on the spot a few dozen metres from his home’, the Ukrainian prosecutor general said during the opening phase of the trial last week.

Prosecutors said Shishimarin was ordered by a superior ‘to kill a civilian so he would not report them to Ukrainian defenders.’

Iryna Venediktova, the prosecutor general, said: ‘Shishimarin is actually physically in Ukraine. We are starting a trial not in absentia but rather directly with the person who killed a civilian, and this is a war crime.’

In a video shared by the Security Service of Ukraine on May 4, Shishimarin described how he shot the man.

The SBU described the video as ‘one of the first confessions of the enemy invaders.’

‘I was ordered to shoot,’ said Shyshimarin, wearing a blue and grey hooded sweatshirt. ‘I shot one (round) at him. He falls. And we kept on going.’

He was captured when his column was surrounded while they tried to return wounded soldiers to Russia. The footage then shows Shishimarin calling his father, saying: ‘They treat us well here.’

The father then tells Zolkin: ‘He is just a soldier. I don’t think he knew where he was going. You say he invaded, and we are told that they were defending the country. He didn’t know. He was told to. You hear one thing and we another.’

The clip ends with Shishimarin urging fellow Russians not to join the war effort and protest instead.

Kyiv has repeatedly accused Russian troops of committing atrocities since the invasion began on February 24. There are also allegations of mass rape, torture and execution being carried out by Putin’s forces while the occupied Ukrainian towns in the Kyiv region. 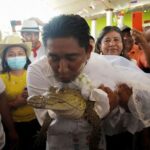 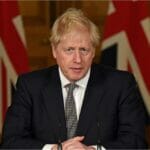 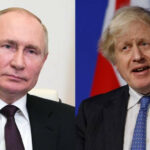 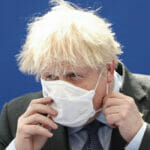 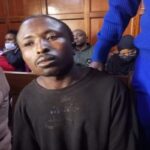