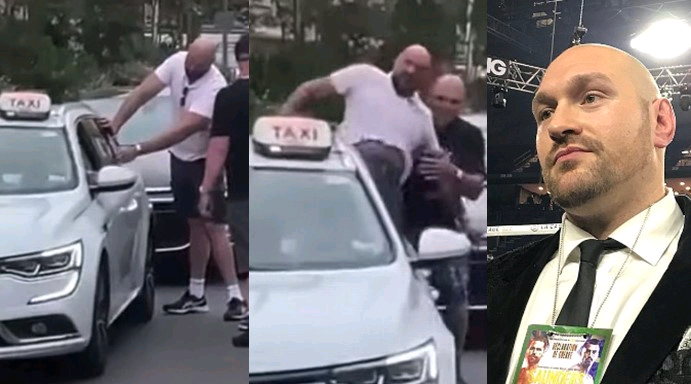 British professional boxer and two-time world heavyweight champion, Tyson Fury has been spotted reacting angrily after a cabman refused to let him into his taxi.

The incident occurred in the beautiful French city of Cannes, where the Gypsy King, 33, has been enjoying some down time after his victory over Dillian Whyte last month.

A footage making the rounds on the internet captures the moment Tyson, who was visibly drunk was being escorted towards the cab by a pal and dad John. With his 6ft 9in frame stumbling from side to side, Fury is seen swaying as he approaches the vehicle.

The heavyweight champion tried to get in through the back door of the cab but noticed it was locked.

With the driver’s side window open, the taxi driver appears to explain to Fury’s entourage he won’t let him in. After a back and fourth between the driver and the boxer’s pals, the driver decides to pull away.

A furious Fury then lashes out and kicks the bumper of the white Renault as one member of the group attempt to stop him.