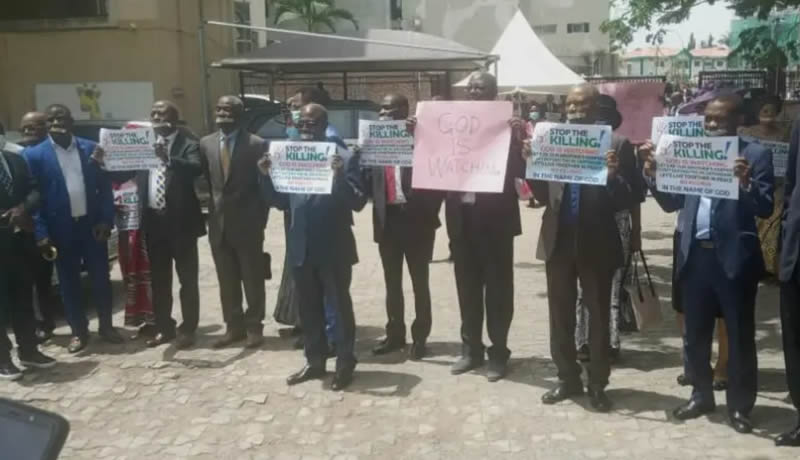 Members of the Redeemed Christian Church of God (Central Parish) in Abuja have protested the killing of Christians in Nigeria over alleged blasphemy with their lips sealed with cellotape.

The protest which took place after the Sunday service at the Central Parish in Wuse 2 area of Abuja was led by the Regional Pastor of the Parish who refused to give his name to journalists.

Another Pastor of the church said the decision not to speak on the protest was an “order from above.”

The protesters also refused to speak to journalists as their mouths were sealed with cellotape.

They asserted that the demonstration was a silent protest against killings in the name of God.

WITHIN NIGERIA gathered that a presidential aspirant for the 2023 election under the platform of the All Progressives Congress and Vice President Yemi Osinbajo are a member and Senior Pastor of the RCCG.

Some inscriptions on the placards carried by them included, ‘Stop the killing! God is watching’; ‘No killings in the name of religion’, ‘Don’t defend the indefensible’; and ‘Let’s live together in peace.’

The Christian Association of Nigeria, had called for a nationwide protest over the gruesome killing of Deborah Samuel, a 200 Level student of Shehu Shagari College of Education in Sokoto by Muslim fundamentalists.

Some Muslim colleagues of Deborah alleged that she blasphemed their religion, for which she was stoned to death before setting her ablaze.