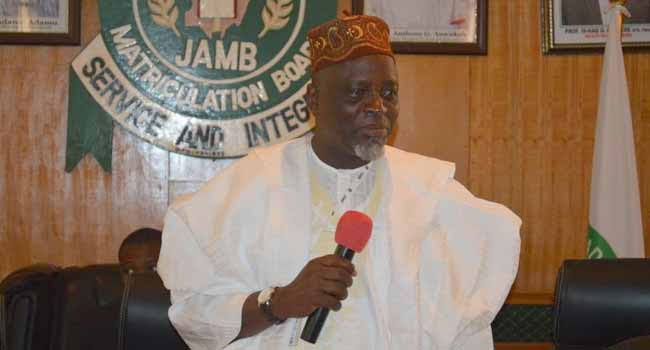 The Joint Admissions and Matriculation Board (JAMB) has remitted a total sum of N27.2 billion in operating surplus to the Federal Government’s coffers from 2017 to 2022 while N9.7 billion was used for capital projects in the same period.

This is just as the Federal Government has approved the establishment of an Advanced Level (A-Level) certificates data bank in the country as part of measures to checkmate the use of fake certificates by candidates in securing admissions into tertiary institutions in the country.

Registrar of JAMB, Professor Is-haq Oloyede, who made the disclosure on Tuesday in Abuja, noted that the sum of N3 billion operating surplus was remitted to the Government in 2022.

Oloyede also disclosed that the Minister of Education Malam Adamu Adamu has approved the establishment of an Advanced Level (A-Level) certificates data bank in the country as part of measures to checkmate the use of fake certificates by candidates in securing admissions into tertiary institutions in the country.

He spoke at the opening session of a 3-day workshop for the Public Relations staff of the Board. The workshop, which was organised in collaboration with Premium Times Academy, has its theme: ‘Media, Publicity And Public Relations In The Modern Age.’

Oloyede, who was represented by the JAMB’s Director, Legal Services, Dr Abdul Wahab Oyedokun, said the Board has taken several measures to ensure total sanity in its examination processes.

While listing some of the measures including the deployment of sophisticated biometric technology to curb multiple registrations in the Unified Tertiary Matriculation Examination (UTME), Oloyede said the Board has taken another major step to put an end to using of fake A-Level certificates to secure admission.

“In the last one year, and in the second coming of Professor Oloyede as registrar of JAMB, one of the major assignments we did here was to focus on some of the things that are happening in these JUPEB and IJMB.

“And during the last exam, we called a stakeholders meeting and invited managers of these organs and we asked some questions. We also collaborated with other security services to spread our net across the country to see what is happening and lo and behold more than 47 proprietors of these, some of their lecturers and teachers, and people conniving with them in perpetrating malpractices were arrested all over the country.

“Arsing from that, the Honourable Minister of Education has graciously approved the establishment of an A-Level data bank. So for example, in a particular university, 90 per cent of those who presented their A level results for admission were found to be fake,” the JAMB boss said.

According to Oloyede, the date bank will ensure all A-Level results are registered under one platform to bring about the standardisation and integrity of the certificates.

Earlier, JAMB’s Head of Media and Protocol, Dr Fabian Benjamin, who commended Oloyede for his massive support for the workshop, called on the Board’s Public Relations staff to leverage the training to do more in the discharge of their duties amid a surge in citizen journalism.

He said: “Today’s media has changed the dynamics of influence and put power in the hand of the ordinary people, PROs must now engage in the conversation through various new channels and tools. Hence the need for this workshop which is aimed at building and maintaining the positive image of JAMB in the face of smear campaigns and misrepresentation of the activities of the Board.

“PR officers are often the first contact for individuals or organisations seeking to reach out in an informed way. They address inquiries from the media and other parties as well as track media coverage and promote industry trends.

“As the music changes, we must change dance steps or else risk dancing out of tune. Nowadays, the exclusivity enjoyed by mainstream media has come to a halt. Journalistic endeavours by non-professionals, also known as ‘citizen journalism,’ heralded the influx of user-generated content which seems to compete with content from the mainstream media — in terms of speed, ease, accessibility and availability of use.”