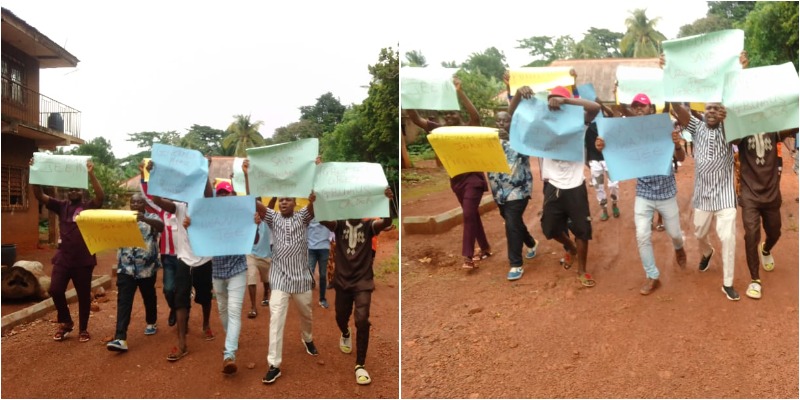 Some youths from Enugu State’s Igbo-Etiti/Uzo-Uwani federal constituency protested against the outcome of the purported People’s Democratic Party (PDP) House of Representatives primary that took place at Ogbede, Igbo-Etiti Local Government Area early in the week, just days after the PDP primaries.

In a peaceful protest, youths marched along major roads in Nsukka LGA, demanding that the results of the PDP primary election, in which Hon Martins Okeh was declared winner, be annulled.

Hon. Okeh is the incumbent House of Representatives member, representing the Federal constituency.

They said that Hon Chidiebere Otti, an Abuja based successful business man, who is from Uzo-Uwani LG popularly known as ‘Canopy’ should be declared winner for the interest of peace, equity, justice and fairness.

Some of the placards carried by the protesting youths reads; “Gburus save Uzo-Uwani LG from Igboetiti LG.

“Okeh Martins must Go, this is turn of Uzo-Uwani, Igboetiti obey Gburus order.

INEC warns against multiple registration, gives reason for surge in…

“Stop the marginalisation and give Uzo-Uwani sense of belonging,” among others.

Addressing newsmen, Comrade Anthony Okonkwo alleged that no election was conducted and that the results announced were not a reflection of the people’s will.

According to him, “the said primary election never took place as we stayed there until night, after violence erupted, following the decision of Igboetiti LGA, led by Dr. Martins Okeh, to flout the governor’s instruction

“The purported results being circulated online, where Dr. Martins Okeh was declared winner was a pre-recorded video as there was no casting of votes on the 22nd of May, at Ogbede.

He however, stated that the protesters stormed Nsukka streets to make the public hear their voice, while wondering why Igboetit LGA should disobey the governor’s directive.

“The Governor who is leader of the party gave a directive that Hon. Chidiebere Otti (Canopy) be delivered for Igbo- Etiti/Uzo-Uwani Federal Constituency and our sister LGA, Igbo-Etiti Flouted the order.

“The Governor gave similar directive to other federal Constituencies across the state, and it was obeyed to the later, so why is our own different?

“We are here in solidarity with the leader of the party and our Governor to make the above points clear to the world.

“How can one person be taking what belong to two LGAs?, Why is Igbo-Etiti dominating and marginalising Uzo-Uwani.

However, when contacted Hon Okeh said that he won the PDP primary election for Igbo-Etiti/Uzo-Uwani federal Constituency under the supervision of INEC and PDP electoral officials.

He stated that some of his opponent mobilised hoodlums and attempted to obstruct the process when they noticed that he’s already leading them with high margin during the vote count.

“The election was held after the accreditation of the delegates under the conducts and supervision of PDP electoral committee and INEC observers.

“Everything was going on well until the counting of votes when some of my opponents realise that I’m already leading them by the number of the votes counted, they went and immobilise hoodlums who came and attempted to cause confusion,” he said.

Okeh who is seeking to represent the constituency for the third time, however urged those against his victory at the primary to go to the party’s appeal panel and lodge their grievaIgbo-Etiti.