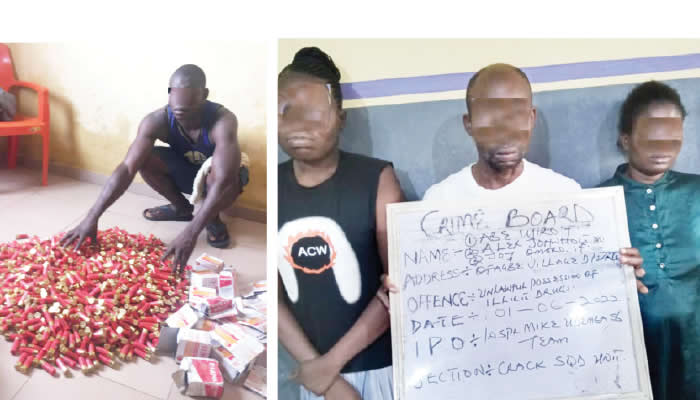 A driver identified as Innocent Uboh has been arrested by the police in Delta State for being in possession of 1124 rounds of live cartridges, 20 bottles of codeine and other contraband drugs.

Uboh was arrested around 3.30 pm on Thursday, June 2, 2022, by operatives attached to the Command’s Safe Delta Tactical Squad deployed to Head Bridge, the boundary between Delta and Anambra states.

The state police spokesperson, DSP Edafe Bright, who disclosed this in a statement said the suspect was intercepted during the routine stop-and-search on the road.

“While on stop-and-search duty at the Head Bridge, the police intercepted one Innocent Uboh, a native of Ogume in Ndokwa West LGA, Delta State, driving a Toyota Hiace bus with number plate FGG 645 ZV.

“The driver was the only occupant of the vehicle. He was flagged down, and upon searching the vehicle, 1124 rounds of live cartridges, 20 bottles of codeine, and other illicit drugs were recovered.

“The suspect claimed that the cartridges belonged to a man named Monday Adibeli, a 61-year-old indigene of Ogume, Delta,” part of the statement read.

Bright further said that operatives were deployed to Ogume, where the alleged owner of the cartridges was arrested, adding that investigations were ongoing.

“The suspects will be arraigned in court as soon as investigation is concluded,” the police said in a statement.