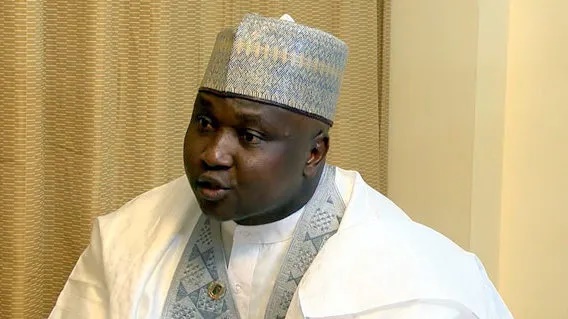 Why Bola Tinubu’s emergence as presidential candidate of APC did not surprise us – House Leader, Doguwa

Alhassan Ado Doguwa, the Majority Leader of the Nigerian House of Representatives, has disclosed why the announcement of Bola Tinubu as the presidential candidate of the All Progressives Congress (APC) did not surprise them.

Speaking during an interview with Channels TV on Wednesday, the majority leader stated that the emergence of Bola Tinubu as the presidential flag bearer of the party did not come to them as a surprise because he has invested too much in the political space of Nigeria.

Doguwa went on to stated that Tinubu is the Buhari of Southern Nigeria because of his unprecedented popularity and connections in the country.

He said, “The emergence of Bola Tinubu to us today as the presidential flag bearer of our great party did not come to us as a surprise because this is someone we have kept telling people that he invested too much in the political space of this country.”

He said Tinubu “has the network and the connection of people, and has what it takes to deliver”.

“To me and a great number of people from Kano and indeed the north-west of Nigeria, we never found this as a new development; we expected much of that,” he said.

“The emergence of Bola Ahmed Tinubu as the presidential flag bearer to me is scientific because two major factors that you can’t take away from our political space today is the fact that you have two (Muhammadu) Buharis in the nation; the Buhari of the north and the Buhari of the southern part of the country, in terms of their unprecedented popularity, connection and in terms of having what it takes to even deliver.

“So, to me, Bola Ahmed Tinubu is the Buhari of the south and we have our own Buhari in the north and when you have the Buhari of the south and north on the same page, that means success all over. I want to believe that his emergence to many Nigerians was not only a surprise but is the least that we expected. We expected from the outcome of the election, we expected that our delegates will be reasonable enough to pay back to this person whose dues he has paid extraordinary.

“We are all proud of the emergence of this gentleman to run for our party because he is one person, take it or not, he is the only candidate in the Federal Republic that will be able to deliver his zone bloc votes intact. Remember when Buhari came to run under the APC arrangement, he was also having the advantage of delivering his own zone.”

Doguwa expressed hope that “Tinubu will have more than 8-10 million votes from the southwest alone and the northwest is there for him”.

He, however, said he was surprised that Vice President Yemi Osinbajo did not step down for Tinubu at the party’s national convention as it was clear that the northern governors were behind Tinubu.

“I’m surprised that the VP did not step down, I thought so because I have seen how governors from the northern part of the country agreed.

“Everybody knew even before the election, it was not only an agreement to allow the south to come up a presidential flag bearer, it was beyond that. The governors of the northern part of the country did not only agree to concede power to the south but also galvanized their support and solidarity behind Bola Ahmed Tinubu; it was not a secret. So I thought the VP, Osinbajo would have stepped down being someone that’s a kinsman,” he said.

Doguwa knocked the emergence of former Kano governor, Rabiu Kwankwaso as the presidential candidate of the New Nigerian Political Party (NNPP), describing him as a serial loser who only joined the NNPP to actualise his selfish interest.

He said, “We have a very vibrant, strong and energetic horse to ride on this race while the other party has only a horse to ride.

“The PDP has only a horse to ride. The NNPP is not an issue, it is a mushroom political party, the flag bearer doesn’t matter, politics is about practical reality. This is one person (Kwankwaso) who was the leader of the party in Kano state at a time when he was a member of the national political party (PDP) that has all it takes to be called a national party, it had all the tenets of what you call political party networking and at the end, he could not deliver his immediate state constituency.”

He said Kwankwaso also lost his senatorial seat after losing the election in his local government area.

“He (Kwankwaso) is only into a new political party to actualize his selfish interest, a self-serving interest which in the end will lose out and will continue to be a loser. Selfish in the sense that when somebody wants to aspire for something, aspiration is one thing and to be able to actualize that aspiration is another thing.

“I think Kwankwaso is only out to put on the record that ‘I have run the presidential election of the Federal Republic of Nigeria’ and at the end, he will still lose,” Doguwa said.