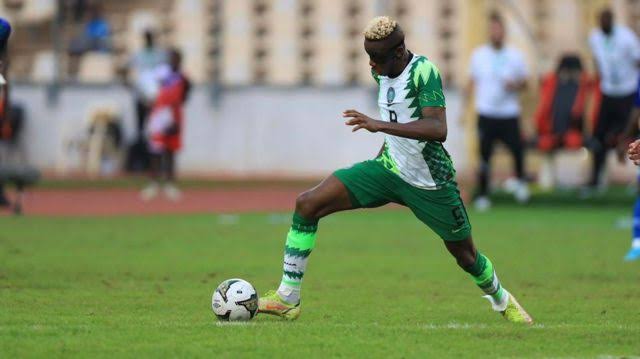 The Super Eagles confirmed their superiority over Sao Tome and Principe with a 10-0 thrashing at the Grand Stade D’Agadir in Morocco.

It was also a match with many firsts and the biggest ever win in Nigeria’s history since the Eagles trounced neighbours Benin Republic 10-1 in 1959.

Jose Peseiro elected to move Calvin Bassey into the centre of defence with Semi Ajayi in the injury-enforced absence of William Troost-Ekong, which meant Zaidu Sanisi started at left-back.

Osimhen started the ball rolling with a thumping header after good work down the left flank by starting captain, Moses Simon. Moffi tried his luck from distance in the 19th minute but his effort was straight at Anastacio Braganca.

Osimhen, always playing on the shoulder and caught offside on two previous runs, broke free in the 28th minute off a scooped Aina pass and laid on for Simon.

Two became three in the 43rd minute when Osimhen laid on for Moffi, who showed great feet to sidestep Nilton before powering home. It was the Lorient striker’s first goal for Nigeria in his fourth appearance.

The Eagles were quickly into their stride in the second half as Osimhen scored his second of the afternoon with a header from a cross by Lookman. This was a sign of what was in the offing.

In the 55th minute, Etebo scored straight from a free-kick from the edge of the box. It was the midfielder’s first goal for the Eagles since March 2021. Moffi added his second on the hour after great work down the left by Sanusi.

Lookman joined the party by scoring his first goal for the Eagles in the 70th minute, pouncing on a rebound after Braganca made a save from Moffi.

Osimhen added his third and fourth goals in the 65th and 84 minutes as the Eagles chased a record score line.

Osimhen hit the goal framework in 87 minutes and headed off target in the 88th as the green wave continued.

Emmanuel Dennis won a penalty in the first minute of added time and Dennis was gifted the chance to score his first goal for his country and he duly complied to give the Eagles their biggest ever win in their history.