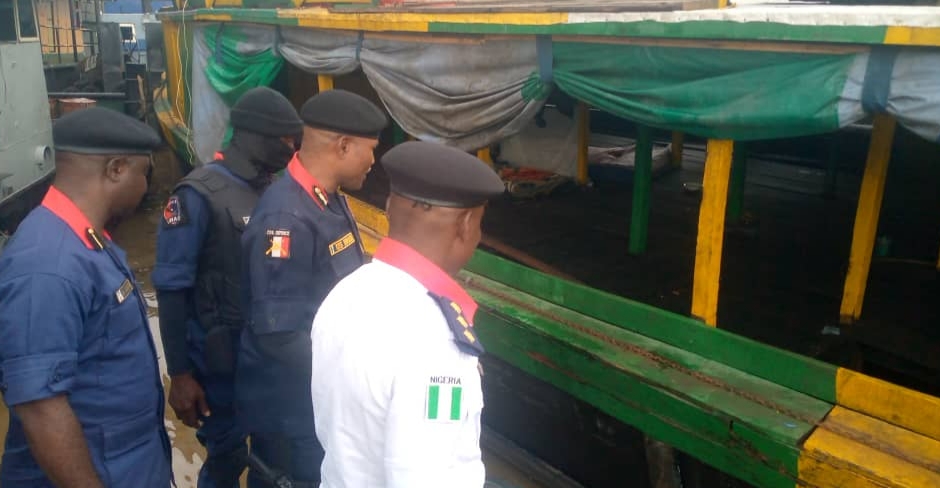 The Nigeria Security and Civil Defence Corps, Delta Division has disclosed that it has arrested a boat conveying 100,000 litres of illegally refined automative gas oil (AGO), also known as diesel.

This was contained in a statement released on Thursday by Emeka Okwechime, public relations officer (PRO), NSCDC Delta.

The agency said men of its newly inaugurated unit arrested the boat at Pessu Water Side in the state.

NSCDC said it also intercepted a local boat containing about 41 pieces of pipes at Okologba community in Patani LGA.

“Men of the newly inaugurated Commandant General Special Anti Vandal Monitoring Unit led by a Deputy Commandant Of Corps DCC Brah have arrested a boat containing about 100,000 thousand litres of petroleum product suspected to be Automated Gasoline Oil (AGO. It was revealed that the Oil thieves took their heels upon sighting men of the NSCDC Special Quad,” the statement reads.

“A local boat containing about 41 pieces of pipes was intercepted at Okologba community in Patani Local Government on the above date while suspects were at large. An investigation is still ongoing.”

The statement added that the anti-vandal monitoring unit of NSCDC cracked down on an illegal dumpsite in Udu LGA, Delta.

“The Commandant General Special Anti Vandal Monitoring Unit also burst an illegal dump site in Udu LGA of Delta State were over 80,000 litres of petroleum product suspected to be illegally refined Automated Gasoline Oil AGO was hidden in under tanks,” it said.

“Investigation is currently on speed gears to arrest those behind the crimes.”