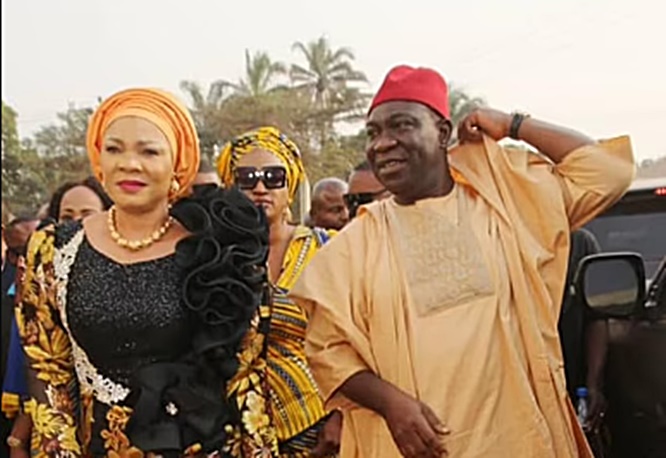 Following the alleged organ trafficking case involving Nigerian Senator Ike Ekweremadu and his wife, Beatrice, who are currently detained in the UK, more details surrounding the case has been shared by top British publication, Daily Mail.

Recall that 60 years old Ike and his wife, Beatrice Ekweremadu, 55, were alleged to have taken the homeless boy to the UK from Nigeria to transplant his organs into their daughter who is suffering from kidney failure.

Daily Mail, revealed that a consultant working in a NHS hospital refused to remove a vital organ from a teenager allegedly trafficked to London from the streets of Lagos by the former deputy president of the Nigerian Senate and his wife, a court has heard.

The doctor at the Royal Free in Camden became suspicious about whether the alleged victim was aware he was the donor of the kidney and whether he was 41 as his passport claimed.

The ’15-year-old’ boy was given the passport of a 41-year-old in order to get into the UK, but did not know he was there to donate a kidney until he went a hospital appointment in London, a court heard yesterday.

After he arrived in the capital in February he had a string of medical appointments about kidney donation, but a consultant at the Royal Free Hospital in Hampstead, North London, became concerned about the boy’s real age and if he knew he was there to donate an organ, it is alleged.

Prosecutor Damla Ayas told Uxbridge Magistrates Court yesterday: ‘The victim was 15. In Nigeria, he was approached by both defendants. He was homeless on the streets of Lagos. They deceived him and promised him a better life in the UK. He was given a passport for a 41-year-old. The passport was illegally obtained by these defendants.’

‘He was provided with a medical travel visa saying the purpose of the travel was to provide medical treatment for the defendants’ daughter who was undergoing dialysis in relation to a number of health issues.

‘It was premeditated, it was planned. Blood tests were obtained in Nigeria and he travelled to the UK in February this year.

‘The consultant was concerned about his actual age and was concerned he was not aware he was the donor of the kidney. He only found out that the purpose of his visit was for an organ transplant when he visited the hospital’. Ayas said

Ekweremadu has been in the UK for at least the past fortnight having met with members of the Nigerian community in Britain in Lincoln around ten days ago.

He tweeted: ‘It was a pleasure and an honour to receive a letter of appointment by the University of Lincoln, UK, as Visiting Professor of Corporate and International Linkages. I also got a highly treasured gift – a copy of the Magna Carta. It was created in 1215, about 807 years ago’.

They arrested the couple two days ago at Heathrow Airport as they attempted to board a plane to Turkey – where it was suggested that the procedure could take place – the court heard.

The teenage boy is now under the care of safeguarding authorities and the Metropolitan Police, officials say.

Ekweremadu and accountant wife Beatrice, 55, are charged with conspiracy to arrange or facilitate travel of another person with a view to exploitation, namely organ harvesting.

Prosecutor Damla Ayas said: ‘It is a conspiracy in relation to human trafficking offences for the purposes of organ harvesting. The victim, in this case, is 15 years old

‘They the couple were interviewed at the police station. Both of the defendants have provided a prepared statement.

‘He said at no stage has he arranged transport for anyone with intention to exploit them.’

His wife similarly denied the allegations in her prepared statement, the court heard.

Gavin Irwin, representing Ekweremadu, said: ‘There is no question this is a serious allegation. Mr Ekweremadu is a member of the senate in Nigeria.

‘He has previously held an even more senior role as deputy president of the senate.

‘He is a member of the bar in Nigeria. He is a principal in a law firm that bears his name.

‘Those issues taken together go way beyond him being a person of good character…rather that he has led a blameless life as a public servant.’

Mr. Irwin added that the allegations were ‘nothing short of preposterous’.

Antonia Gray, for Mrs Ekweremadu, said: ‘She has never been complicit or involved in any alleged illegal trafficking of any young person.

‘She is a financial accountant…with an unblemished record.’

The couple have an address they could stay at in Willesden, northwest London, the court heard.

The prosecutor made an application to adjourn matters for 14 days.

Ms. Ayas said: ‘In respect of these offences Attorney General consent is required and the Crown require 14 days for that to be obtained.’

Magistrate Lois Sheard said: ‘These are serious allegations and these matters are now adjourned until 7 July back here at Uxbridge.’

Ms. Sheard remanded both defendants into custody ahead of their hearing next month.

The Ekweremadus are charged with ‘conspiring to arrange or facilitate travel of another person with a view to exploitation….between 1 August 2021 and 5 May 2022 within the jurisdiction of Central Criminal Court’.

The investigation was launched by the Met’s Specialist Crime team after detectives were alerted to potential offences under modern slavery legislation in May 2022.

The Met Police has confirmed that the boy is safe and being looked after.