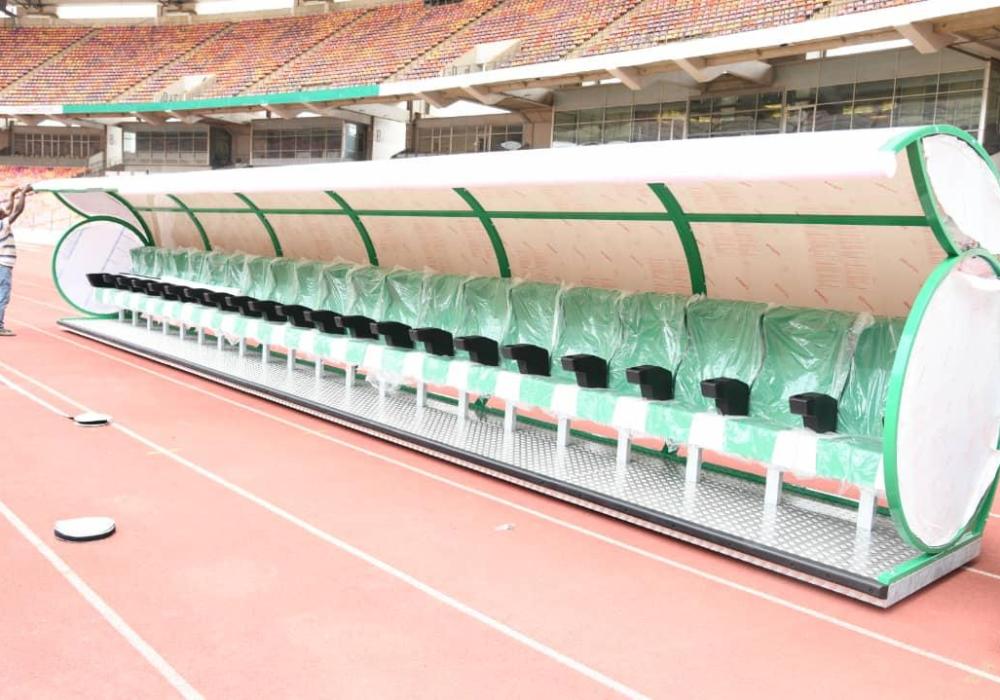 Regarded as the first of its kind in Nigeria, the facility is a new customised portable VIP facility, designed and approved by FIFA with ergonomic seat and in green and white to reflect the official colours of Nigeria.

It has fully padded head rest back rest with fire-resistant polyurethane foam. It also has a double density, as well as polyurethane armrest with integrated cup- holder, galvernized steel, aluminum foot rest surface with high capacity hard-nylon pivoting wheels on both sides.

The facility has a total height of 225cm, total depth 180cm and 54 seats in all for players, referees and team officials, while it is totally dismountable.

A statement by the ministry of youth and sports on Saturday, said the team shelter was formally handed over to Ismaila Abubakar, the ministry’s permanent secretary, by Waidi Akanni, the chief executive officer of Match International, who commended the ministry’s efforts at turning around sports facilities in the country.

“Other sports stadia in the country also need to upgrade and can make do of this type of the modern VIP team shelters,” Akanni said.

Abubakar acknowledged the sports minister’s foresight in drawing up laudable initiatives like the adopt-a-pitch programme which led to the Public-Private Partnership (PPP) arrangement with Aliko Dangote for the rehabilitation of the Abuja stadium after it was abandoned for more than a decade.

According to the statement, the National Stadium Surulere, Lagos and the Obafemi Awolowo Stadium, Ibadan are currently at advanced stages of rehabilitation.