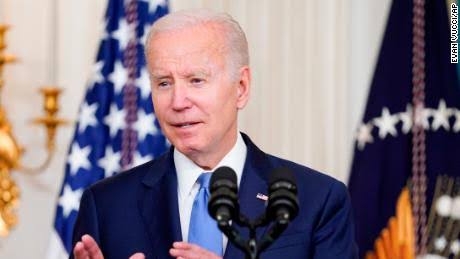 President of United States, Joe Biden has stated that women in the country are now at risk due to the supreme court’s ruling that there is no constitutional right to abortion in the country.

Recall that the court had overturned Roe v. Wade, the historic 1973 ruling that affirmed the constitutional right to abortion in the US, on Friday in a 6-3 decision.

Courtesy of the reversal of the law, US states will now be allowed to determine their own abortion laws as they deem fit.

More than 20 states are expected to outlaw or restrict abortion following the ruling.

Speaking after the reversal, Biden described the ruling as a “tragic error”, adding that it had expressly taken away a constitutional right from the American people.

“It didn’t limit it, it simply took it away as never been done to rights so important to so many Americans. It’s a sad day for the court and for the country,” he said.

“Fifty years ago, Roe v Wade was decided and has been the law of the land since then. This landmark case protected women’s right to choose; a right to make intensely personal decisions with their doctor, free from the interference of politics. It reaffirmed basic principles of equality, that women have the power to control their own destiny and it reinforced the fundamental right of privacy; the right for each of us to live how to choose our lives.

“Now, with Roe gone, let’s be very clear, the health and life of women in this nation are now at risk.

“Make no mistake, this decision is a combination of a deliberate effort over decades to upset the balance of our law. It’s a realisation of an extreme ideology and a tragic error by the supreme court in my view.”