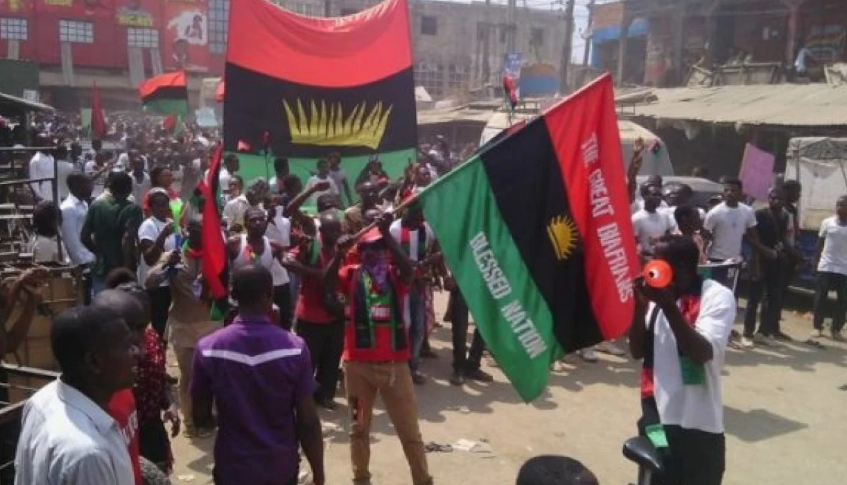 The leadership of the Indigenous People of Biafra has charged the Department of States Service and the Nigerian military to bring its supporters, Idara Gold and Henry, to court, if they haven’t been killed.

According to the group, the repeated failure by the DSS and sister security agencies to bring the duo to court left it with the belief that they had been killed in custody.

The secessionist group, while calling on the international community and global human rights organisations to intervene, alleged there was a grand plot by the military to turn Biafraland into a killing field.

This was contained in a statement released on Saturday by the group’s Director of Media and Publicity, Emma Powerful.

The statement read in part, “The Indigenous People of Biafra, ably led by our great leader Mazi Nnamdi Kanu wish to alert the world about the crime against humanity being perpetrated by the Nigeria government and its security agencies especially DSS and Nigeria military against our people in Nigeria.

“The security services have turned our people they kidnapped into sex machine and factory for organs harvest in many of their detention facilities across the country. IPOB family members such as Gold Idara and Henry abducted by the Nigerian DSS agents have fallen victims to this wicked act of organ harvesting because there is no evidence these people are still alive.

“Seven months after they were kidnapped, they are held incommunicado and they have been denied access to their lawyers and family. The security agency on several of the court dates has equally failed to produce them in court to answer to whatever charges may be proffered against them.

“Having failed to produce these innocent people to court or grant their lawyers access to them, we the global family of the Indigenous People of Biafra is left with no other option than to alert the world community and the Human Rights Organisations that the Nigerian Gestapo secret Police the DSS has murdered and Harvested the Organs of Idara Gold and Henry.

“Intelligence report available to the global movement and family of the Indigenous People of Biafra ably led by our great leader Mazi Nnamdi Kanu showed and indicated that Idara Gold and Henry who were illegally abducted at different places in Biafra land last year may have been summarily executed and their organs harvested by Nigeria Department of Security Services in collaboration with the Nigeria Army.

“That was the reason the DSS has been giving flimsy excuses on several occasions now for not bringing the two innocent Biafrans to the court. The non-show appearances of Idara and Henry were deliberate in the hope that their news will fade away with time.

“Idara Gold was abducted in October 2021 in Enugu State for putting on Biafra attire during her birthday celebration. Initially, the DSS denied arresting Idara when she was declared missing by her friends and family members. After much pressure DSS later acknowledged her arrest and transferred her to the DSS Head Office in Abuja. After frantic efforts made by her lawyers, IPOB lawyers and relatives to have access to her in DSS detention facility in Abuja failed, DSS claimed that she has been transferred to Wawa Military detention facility in Kainji in Niger State.

“This Wawa Military detention facility is another abattoir where Biafran youths are butchered and their organs harvested for sale.”

The statement added, “Idara, is not a military personnel, didn’t commit any crime known to the law, nor was she involved in any military coup. Why will an innocent young lady be transferred to a military detention facility because of her choice of clothing?

“She was raped severally in the army barracks before plugging out her organs for sale. Henry was equally abducted in a similar way last year on the suspicion of being an IPOB member and taken to DSS detention facility in Abuja. Till date no one has seen him and both of them have fallen victim to the organ harvest mafia in the Nigerian Security agencies.

“For the third time, the compromised DSS failed to produce Idara and Henry during a court session held on June 22, 2022. DSS claimed they don’t have the logistics to bring Idara Gold to Abuja court from Wawa Military Detention facility Kainji, Niger State. The case has now been further adjourned to October 10, 2022. On the whereabouts of Henry, the DSS has remained mute about him. With this long court adjournment in the case of extreme Human Right Abuse, one begins to wonder if the Judge is an accomplice to this case of forceful disappearance and organ harvesting business of Lawless Nigerian DSS, Nigerian Police and the Nigerian Army.

“Over eight months that Idara and Henry were illegally adopted by DSS, no one has seen them. The lawless and compromised DSS have denied them access to their lawyers and relatives. This alone confirms that they have been butchered and their organs harvested in a detention facility as is the culture in all the Nigeria Security Services agencies.”