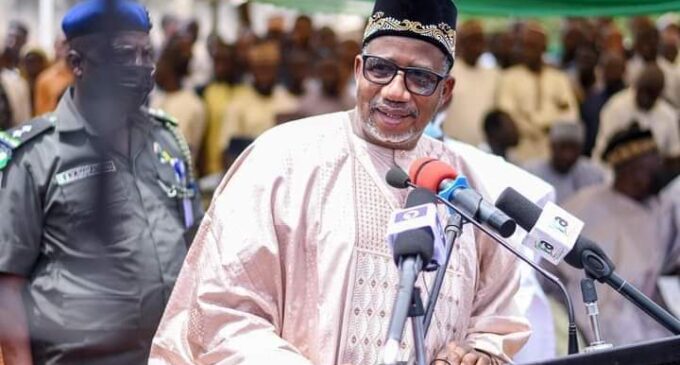 Governor of Bauchi, Bala Mohammed has called on security agencies in the state to develop a proactive strategy to protect rural communities from bandits and kidnappers.

The charge was given by governor during a condolence visit to the Sabon Gari Narabi community in Toro LGA of the state where Khadija Abdullahi, a five-year-old girl, was allegedly kidnapped and murdered by her neighbour.

The governor urged Umar Sanda, the commissioner of police, to reshuffle the divisional police officers (DPOs) across the 20 LGAs for a more effective response to issues of banditry and kidnapping.

He called on the residents to join hands with the state government, as well as the security agencies to flush out the criminals in the state.

“We are here to also commiserate with the people of Toro over incessant activities of bandits where about eight incidents happened in Narabi community. It is becoming unacceptable,” Mohammed said.

“The person who perpetrated this mayhem has been arrested and he is facing the law. We are going to follow the case with keen interest.

“Our community leaders should be more vigilant because compromises are everywhere. We have people coming into Toro and Alkaleri because of the size of the LGAs and the terrains.

“We are going to make sure we put our eyes and legs on the ground. We are going to listen and our contacts are with you, so please, collaborate with us.

“Nobody will give you security unless you give yourselves. You should be bold and not be afraid.

“We are not a set of cowards. As the Kauran Bauchi, as the commander of the chivalry in all the emirates, I am ready to lead you.

“So please, whatever you have in store, bring it out. We have to face these hoodlums, criminals and charlatans and we have to deal with them.”

On his part, Sanda confirmed the arrest of some of the perpetrators, including the alleged murderer of the girl.