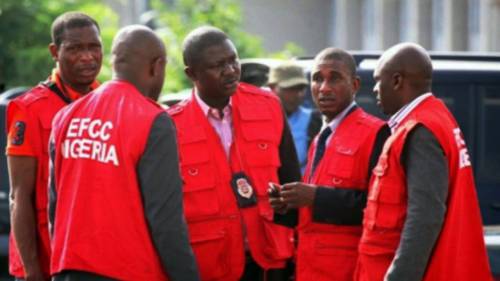 Based on a “valid court order”, The Economic and Financial Crimes Commission (EFCC) has disclosed that suspects arrested over vote-buying during the Ekiti State governorship election, have been detained.

Recall that it was earlier reported that for days the EFCC arrested and detained a pregnant woman, and a nursing mother among other suspects without trial at its Ilorin, Kwara State office based on the allegation of vote buying.

However, the commission, in a statement issued by its spokesman, Wilson Uwujaren on Monday, while reacting denied that a pregnant woman was among the detainees.

He said, “Our attention had been drawn to some reports in a section of the media, alleging that the Commission is detaining “a pregnant woman, nursing mother, others, over vote – buying”, consequent on some arrests made in the wake of the recent governorship election in Ekiti State.

“The Commission wishes to state that there is no pregnant woman among the suspects arrested on allegation of vote-buying during the Ekiti governorship election.

“A pregnancy test conducted on all female suspects arrested during the Ekiti governorship poll at the Kwara State Hospital, Ilorin, returned negative.

“Earlier tests conducted in a private hospital also came out negative for all the female suspects.

“Furthermore, it is important to stress that all the suspects, male and female, are being held, based on a valid Order of Court, pending the conclusion of investigations.

“The suspects would be charged to court as soon as investigations were finalised.

“The public is advised to ignore insinuations and wild claims about mistreatment of suspects as the Commission is committed to the observance of the rule of law in all its operations,” he said.