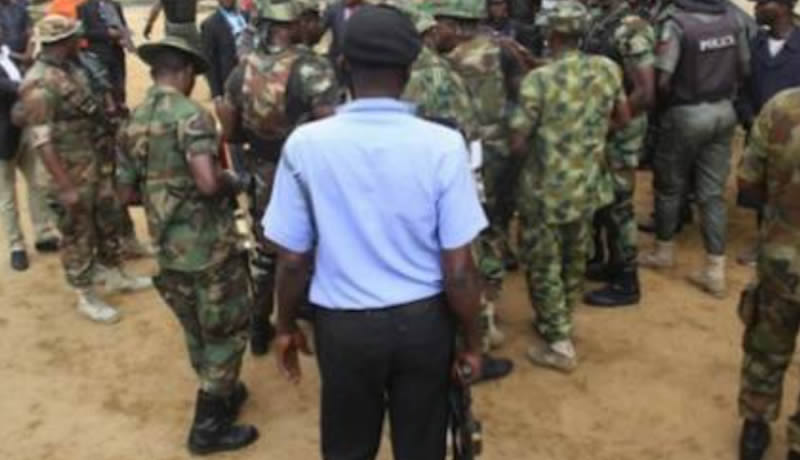 Two persons sustained severe gunshot injuries when yet-to-be identified military men and mobile policemen attached to the Bayelsa State Vigilante Service engaged themselves in a scuffle over a traffic offence at Tombia-Etegwe roundabout in Yenagoa, the state capital.

According to Daily Post, the two victims, Miss Tarilayefa Ariweriyai (29) and Otunu Omanepemo (39), sustained injuries when one of the soldiers, suspected to be attached to an oil servicing company in the state, opened fire.

An eyewitness said a soldier on mufty drove a van against the traffic and was challenged by some members of the Bayelsa State Vigilante Service, and in the process of arguing over his alleged offence, a mobile policeman attached to the vigilante group reportedly gave the soldier two slaps for challenging them in spite of the fact that he committed a traffic offence.

It was also gathered that it was after receiving the slaps that the alleged traffic offender introduced himself as a soldier, and threatened to deal with the vigilante members and policemen at the scene.

A trader at the roundabout, who spoke on condition of anonymity, explained that “when they discovered that the man is a soldier they pleaded with him to let the matter go. He pretended to have accepted apology and drove off. A few minutes later, the soldier returned with two of his colleagues.”

The assaulted soldier reportedly came back in uniform and with two armed colleagues, ” they swooped on the policemen and started hitting them with the butt of their riffles. The fighting continued until one of the mobile policemen successfully disarmed one of the soldiers. It was at that point the other soldiers started shooting sporadically.

“We all scampered for safety. When everywhere was calm, I came out of hiding and discovered that two persons that were by the roadside had sustained gunshot injuries from the shoot out, we later found out that the soldiers had fled the scene”.

It was, however, gathered that the cartridge of the rifle belonging to the disarmed soldier had been dropped at the Akenfa Divisional Police Station where the incident was reported by the State Vigilante Group led by its Chairman, Hon. Doubiye Alagba.

Alagba and some members of the vigilante group also rushed the victims to the Government House clinic where they were referred to the Federal Medical Center (FMC) in Yenagoa.

One of the victims, Omanepemo, who identified himself as a businessman, said he was shot in the buttocks while he was on his way from Gbaratoru.

“As I got to the Tombia roundabout, I saw a scene where soldiers and some policemen were engaged in a serious argument and before anyone knew what was happening, gunshots were fired. And as I turn to run for safety, a bullet hit me at the buttocks,” he said.

The state police command is yet to issue a statement about the incident as at the time of filling this report.