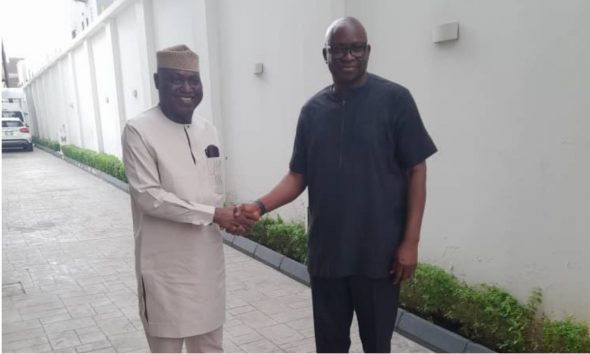 Oyebanji said the visit was to extend his courtesies to Fayose as a former governor of the state, who, according to him, demonstrated statesmanship by congratulating him shortly after he was declared winner of the June 18 election.

Former Governor Fayose, while receiving Oyebanji urged him to be magnanimous in victory and see himself as the leader of the people regardless of their political affiliation.

He promised to support Oyebanji’s administration in whatever area his support would be needed, adding that the development of Ekiti State is a collective effort.

It is recalled that Oyebanji had earlier gone on a thank you visit to the Governor of the State, Dr Kayode Fayemi in Ado-Ekiti, a day after the incumbent Governor led two other APC governors to visit him at his Ikogosi Ekiti country home.

The Governor-elect has also visited the first civilian Governor of the state, currently Minister of Investments, Trade and Industry, Otunba Niyi Adebayo, at his Iyin-Ekiti country home earlier in the week.

He had earlier also visited Chief Deji Fasuan, the nonagenarian elder statesman who chaired the committee for the creation of Ekiti State, under whom he served as Secretary (to the committee) as well as the Ewi of Ado-Ekiti, HRM, Oba Rufus Adeyemo Adejugbe.