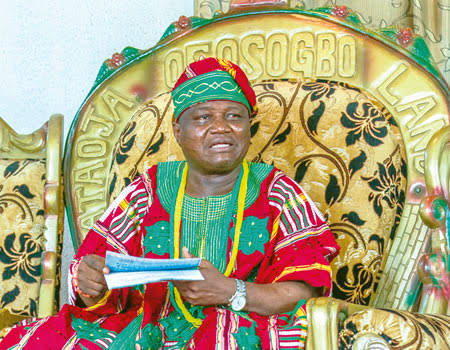 Ataoja of Osogbo, Oba Jimoh Olanipekun says Yorubas must do everything they can to defend themselves against terrorists.

Speaking during a meeting with the Aare Onakakanfo of Yorubaland, Iba Gani Adams, the monarch said the Yorubas must be ready to fend off any aggressors.

He charged Yorubas in Nigeria to prepare themselves physically and spiritually against terrorists.

The Aare paid a visit to palace of Oba Olanipekun on Tuesday.

The Oba condemned the spate of killings, recalling the brutal attack on worshippers at a church in Owo, Ondo State.
The Ataoja said the massacre showed that Yorubaland has remained the target of terror groups.

“I am happy the Aareo Onakakanfo of Yoruba land is here and I want to appeal to him to save our land from these terrorists.

“The Southwest is boiling and it is only when we get ourselves prepared physically and spiritually that we can rid our region of terrorists that have invaded the region.”

Iba Adams said the security challenges in the country needed urgent intervention from all and sundry.

The Yoruba generalissimo assured that the Oodua Peoples Congress (OPC) under his leadership will do everything to forestall a repeat of the Owo attack.

The Aare, however, advised monarchs to desist from giving prominent and sacred traditional titles to non Yoruba people.

The traditional leader said such act was enough to destroy the sanctity of Yoruba culture and tradition.

“Efforts are on to build a workable synergy between the local security and the government agencies.We are ready to partner with Southwest governors to beef up security.

“Kabiesi should help tell our traditional rulers to save our tradition from going into extinction. The idea of giving prominent Yoruba titles to non Yoruba is at variance with Yoruba culture and tradition”, he complained.