Ondo Governor, Akeredolu reveals when he will buy guns for his people 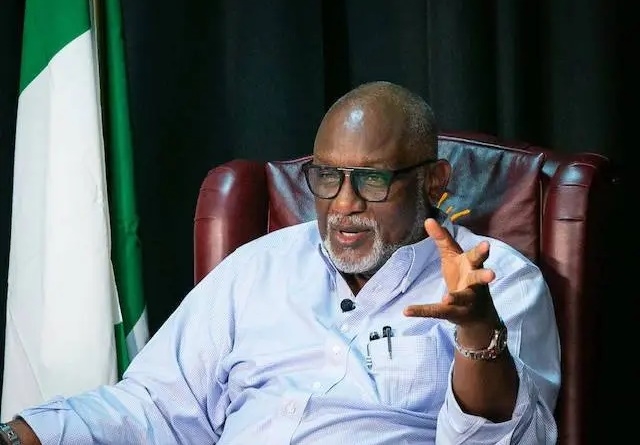 Governor Rotimi Akeredolu of Ondo State has revealed when he will purchase guns for his people.

The governor declared that if terrorists ever attack the state again, he would buy guns for the people of the state to defend themselves

Akeredolu made the declaration last Friday, during a presentation of 50 security-fitted vehicles to all security agencies in the state, including the South-West Security Network codenamed Amotekun Corps.

Recounting the killing of over 40 worshippers at St. Francis Catholic Church, Owo, on Sunday, June 5, Akeredolu lamented that the police could not do anything when the incident was reported to them because they had no operational vehicle, adding that Amotekun later chased the terrorists but it was late.

A report by Daily Independent quoted Governor Akeredolu as saying that “Protecting the life and property of our people is our priority here. Our own interest lies here.

“If we are pushed to the wall, we will also encourage our people to get guns. We are talking to our traditional rulers to get us the traditional powers. I am begging you, nobody, state, the country can continue to witness this kind of insecurity.

“People will be on motorbikes and attempt to attack planes at Airport. How did they come in? Are there no people manning the place? What a country where you can’t get a plane, or train to travel and you dare not travel by road.

“Up till today, not all Chibok girls, now women, have come back. So, what are we doing as a nation? I am worried about security issues in the country, let’s discuss it. Is there no government that they have this leeway to operate just like that?

“We will smoke criminals out of their hidings. Where we arrest them, we will bring them to justice and where they resist arrest, we will send them to where they will get justice.

“Whether they like or not, we will get State Police, it’s just a matter of time.

“Governor Matawalle was pushed to the wall before he asked his people to arm themselves to protect themselves.”

Meanwhile, the governor commended the security agencies in the state for their sustained collective operations in spite of the flash of criminalities, noting that “Amotekun is not competing but cooperating with other agencies.”

Recall that shortly after the Owo church massacre, Governor Akeredolu had reeled out fresh security policies to further beef up security in the state.