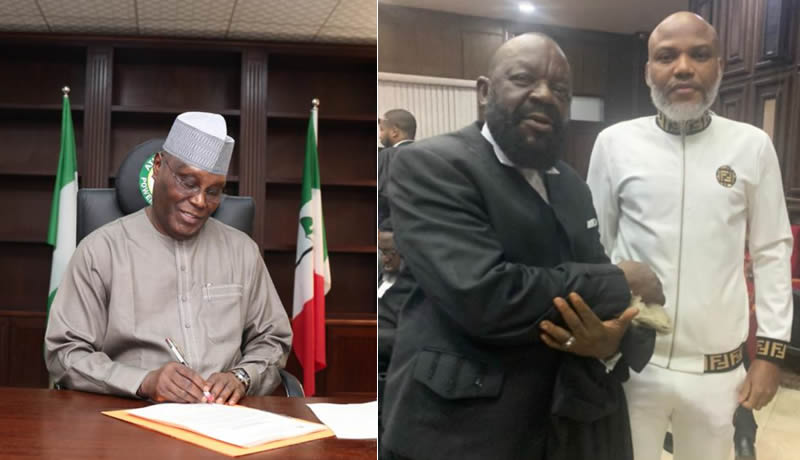 Aloy Ejimakor, Special Counsel to the Leader of the Indigenous People of Biafran, IPOB, Mazi Nnamdi Kanu, has averred that the presidential candidate of Peoples Democratic Party, PDP, Atiku Abubarkar, would not have been a Nigerian citizen if not for referendum.

Ejimofor who stated this in a post on his Twitter handle, argued that peaceful agitation for self determination “is legitimate” and recognised by the United Nations.

He further argued that the recent opinion of the United Nations, asking Nigeria to unconditionally release Kanu and pay him compensations for illegal detention, was an endorsement of referendum as a legitimate tool for resolving agitation for autonomy.

Kanu’s lawyer who maintained that referendum was not new in Nigeria, wondered why the current leadership of the country is reluctant to conduct referendum for Biafra forgetting that Adamawa State only because part of Nigeria through referendum.

“The UN directives on #MNK affirmed that separatist agitation is legal & that referendum is a legitimate tool for settling it.

“Nigeria gained Adamawa and lost Southern Cameroon through referendum and nobody was detained, killed or extraordinarily renditioned.”

Ejimofor further said:” It’s referendum that made Atiku a Nigerian. And it’s through Referendum that Midwest Region came into being in 1964.

“This is all within Nigeria, not counting nations created by referendum – Eritrea, Kosovo, South Sudan, etc.

“The problem is not the separatist agitation. The problem is the militarist response to it. That’s is exactly what is convulsing South-East and Nigetia by extension.”

Ejimofor challenged the Federal Government to stop suppressing the agitation for Biafra by using brute force on the agitators, but simply organise a referendum and allow the people to decide whether or not they would like to be autonomous.

The UN Human Rights Council Working Group on Arbitrary Detention, had in a recent report, indicated both Nigeria and Kenya over Kanu’s rendition, and requested that he be “immediately released.”

It gave Nigeria six months to comply with the opinion or brace up for further actions.