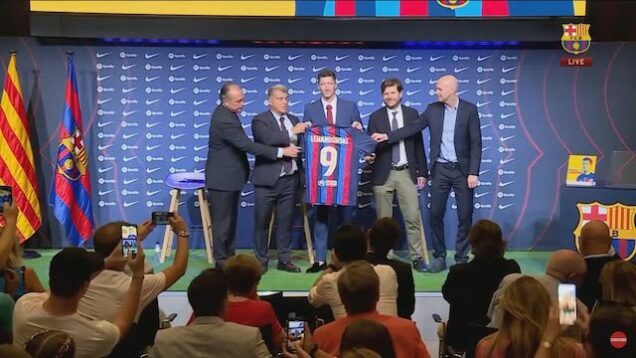 The ceremony took place at Camp Nou in front of 59,026 spectators, and the striker wore the jersey that symbolises scoring.

“The emotion was amazing when I saw so many people for my presentation. I do not have words to express my happiness,”, he said.

“That was something amazing. I want to show my skill on the pitch and give the fans happiness all over the world,” he added.

Lewandowski, who had the same number at Bayern Munich, is himself synonymous with goals having been the European Golden Shoe winner for the last two seasons wearing the number 9 shirt at Bayern Munich.

In his eight seasons with Bayern, his three with Borussia Dortmund and his campaign with Znicz Pruszkow in 2007/08, Lewandowski wore the famous number that brings with it the expectation of goals.