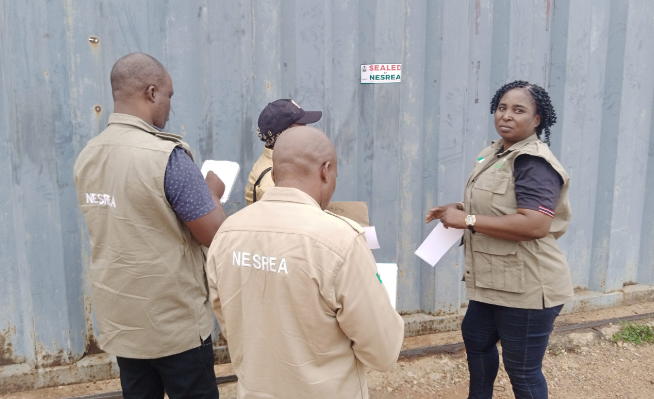 The federal government through the National Environmental Standards and Regulations Enforcement Agency (NASREA) has sealed a quarry site belonging to the China Civil Engineering Construction Corporation and a brick company in Ekiti state over non-compliance with stipulated environmental regulations.

The federal agency through its officials both from Abuja and the state was as well prevented from sealing one of the sites of the Chinese company handling the construction of the ongoing cargo airport in the state.

Speaking Beka lamented that the companies had failed since coming into the state to comply with the laid down rules and guidelines as it relates to the environment, which he said could be detrimental to the health of the residents.

He explained that in the line with the laws establishing the agency, it is determined to ensure the safety and welfare of residents and the coming generation, hence the need for the industries to do the needful, especially getting the Environmental Impact Assessment (EIA) document.

He added that all correspondences and efforts by the agency to make the companies comply with the laws have been frustrated, revealing that the seal would only be removed after necessary paperwork works are done and presented to the agency.

According to him, ” Don’t forget we are one of the parastatals in the ministry of Environment and we have the mandate to enforce all environmental laws. Laws that will help people live a healthy and cleaner life. We are doing this because all development has to be done sustainably in such a way that it will not degrade the land it is sitting on, for generations coming to suffer.

“There are tools that help us to do this sustainable development, like the Environmental Impact Assessment(EIA) and the Audit. They help us to know the kind of impact the company is having on society and how it can be mitigated in the interest of the people. We have told these companies to do the assessment but it is obvious they didn’t do EIA before going to the site and others did not do an audit after every three years.

“We have been able to seal two companies but the third company obstructed us from doing our work which they would be charged in court for obstruction because that is a crime in the law setting up the agency.”

On expectations of the sealed companies, he said, ” they should do what they have been told to do. In the first instance, they were told to conduct an audit or carry out an EIA, if they have violated these, they should follow the procedures for them to have their site unsealed.

“As Nigerians, we should be worrying about the kind of behaviour of people knowing what to do but deliberately avoiding it. Let me tell you that this can’t happen anywhere in the world. In any developed country, they protect their land and the environment because it is out of the environment will get everything we need.”