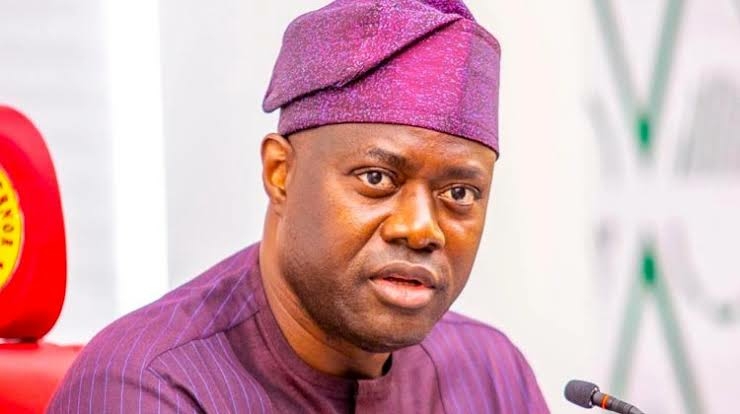 Oyo Chapter of the All Progressives Congress has stated that security in the state will be in a total mess if Governor Seyi Makinde is re-elected for a second term in office in 2023.

This was contained in a statement issued by the State-Secretary, Alhaji Tajudeen Olanite which was made available to journalists on Monday.

The opposition party accused the governor of using the instrumentalities of the state to empower thugs that have been fingered in the killing of some people in the state.

The APC spoke against a threat to kill the party’s 2023 governorship candidate in the state, Senator Teslim Kolawole Folarin, also the Chairman of the Senate Committee on Local Content.

He added that Alhaji Mukaila Lamidi, fondly called ‘Auxiliary’, who was appointed in February 2020 by Makinde as the chairman of the disciplinary committee for the Park Management System of the Oyo State Government, issued the threat to Folarin’s life in a viral video and the governor was silent on it.

According to the party, the threat to Folarin’s life by Auxiliary has become a matter of public knowledge via video clips that have gone viral on the social media space within the past few days.

The statement read in part, “Governor Seyi Makinde does not deserve a second term in office. During this outgoing first term of his, he has made our dear state retrogress in terms of thuggery and hooliganism, which the immediate past governor, the late Senator Abiola Ajimobi, tamed effectively for eight years.

“Apart from the threat to the life of the Distinguished Senator Folarin, the same Mukaila Auxiliary and scores of his thugs have clamped down on the billboards and posters of the opposition parties, especially the leading opposition party in the state.

“Auxiliary has been leading heavily armed thugs to destroy APC billboards and posters in different parts of Ibadan and the state.

“The billboard destruction by Auxiliary and his thugs, engaged by the PDP government in Oyo State is tagged: ‘Operation Destroy APC Billboard and Posters’. They have also started the destruction of shops at Dugbe Alawo and Ogunpa, being operated by people they believed are not favorably disposed to the second-term bid of Governor Makinde.

“It is an attempt to silence opposition and turn Oyo into a one-party state. The PDP-led administration is very intolerant of opposition in the state because they know that they have failed woefully, and they don’t have any good thing to offer the good people of the state.

“But we have a mandate to rescue the state from the hands of these clueless, distracted, promise-breaking rookies in governance and promoters of thuggery fellows. We shall not be deterred by their antics. We shall ensure the liberation of the good people of this state from the claws of these political hawks that have been reported to be in government to steal, kill and destroy.”

The APC State Secretary, Alhaji Tajudeen Olanite, stated further that within nine months of becoming governor in the state, Governor Makinde rubbished the foundation for peace and tranquility laid by a former governor of this state on the APC platform for eight years.

“So, if Auxiliary and his men can be going around to make people cry during the first term of Governor Makinde, who wants a second term in office, the situation will definitely be worse if he wins the second term. The reign of impunity will go to the next level, which will definitely be a monumental setback for Oyo State. We should not allow this to happen.

“We, therefore, call on the Commissioner of Police in Oyo State and the Inspector-General of Police on the threat to the life of a three-term senator of the Federal Republic of Nigeria and a former Senate Leader in the National Assembly to do the needful.”