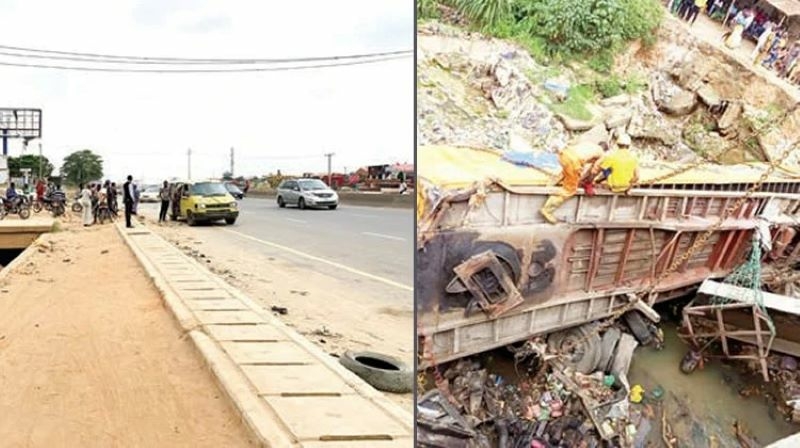 A yet-to-be-identified woman has been crushed to death by the driver of a Toyota Highlander at Arepo Bus-Stop, in the Obafemi Owode Local Government Area of Ogun State.

The woman attempted to cross the Lagos-Ibadan Expressway when the driver, who was driving inward Ogun State, knocked her down at the bus stop.

According to PUNCH, an eyewitness, Amos Fagbamigbe, who operates a commercial bus at Arepo Bus-Stop, said the impact of the accident broke the woman’s neck and hand, adding that she died on the spot.

He said, “The vehicle was a black Toyota Highlander and the driver was coming from Lagos. The vehicle crushed the woman as she wanted to cross the road. Maybe she didn’t look at the road well; the driver knocked her down and did not wait.

“People used vehicles and motorcycles to chase the driver, but when they got to the Asese area, they stopped as the expressway was free. The accident broke the woman’s neck and hand. I was the one that alerted officials of the Federal Road Safety Corps to the incident. Someone even stole the woman’s phone after she got knocked down.”

A fuel attendant at the bus stop, who spoke strictly on condition of anonymity, said no fewer than five people had died within the space of one week at the bus stop.

He said, “The woman that got knocked down yesterday just got down from a motorcycle and wanted to cross the road when the accident happened. Last week, about five persons lost their lives because of accidents at this junction. We need a pedestrian crossing at this junction.”

The Ogun State Sector Commander, FRSC, Ahmed Umar, who confirmed the accident said, “It was practically a hit-and-run case. Our people were not at the spot at the time of the incident for them to note the number of the vehicle and flag it. They (FRSC officials) were the ones who removed the corpse from the road.”

In a related development, an articulated truck crushed a yet-to-be-identified bystander to death in the Ajegunle area of Lagos State.

The Permanent Secretary, Lagos State Emergency Management Agency, Olufemi Oke-Osanyintolu, in a statement on Sunday, said investigation revealed that the accident was caused by a brake failure.

He said, “An articulated truck laden with a 40-foot container was involved in an accident. Investigation conducted revealed the immediate cause of the incident was due to a mechanical fault (brake failure).

“The articulated truck plunged into the canal, while the driver, who sustained some injuries as alleged by bystanders, was taken to an unknown hospital.

“The Nigeria Police, Sango Ota and Alagbado divisions, further confirmed that a bystander — an adult male — lost his life before the truck veered off the road and plunged into the canal.”

In a similar vein, a motorcyclist, identified only as Ebuka, on Friday, lost his life after a Ford Sterling Utility truck, driven by one Alli Isa, crushed him to death around Oba Sekumade/Ogolonto Road, in the Ebute-Ipakodo area of Ikorodu, Lagos State.

Ebuka was said to be riding his motorcycle to a destination in the area when he suddenly rammed into the truck.

The state Police Public Relations Officer, SP Benjamin Hundeyin, said one of the tyres of the vehicle climbed Ebuka’s head, adding that he died on the spot.

“His corpse was deposited at the Ikorodu General Hospital’s morgue. The suspect has been arrested and the vehicle and motorcycle were taken to the station. Investigation is ongoing,” Hundeyin said.