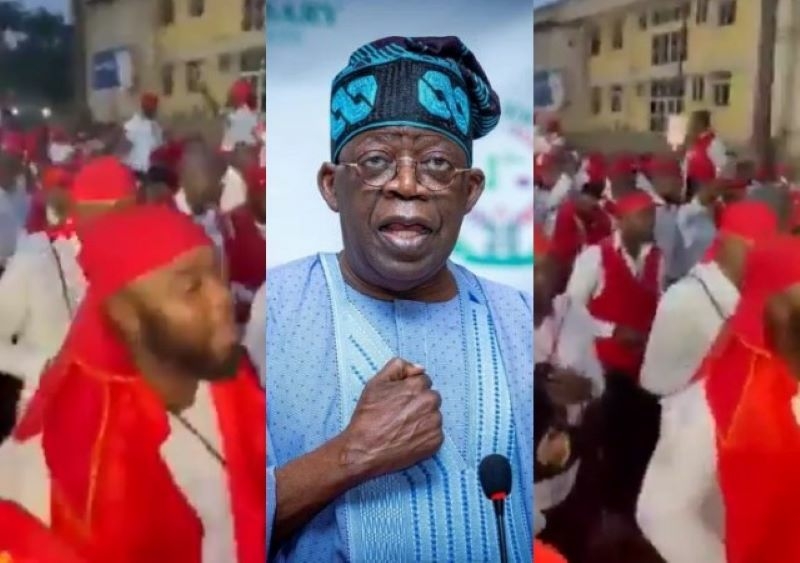 The presidential candidate of the All Progressives Congress (APC) Asiwaju Bola Tinubu, and members of his campaign team are reportedly not happy Nobel laureate, Prof. Wole Soyinka, reacted to the viral video showing members of the Pyrates Confraternity mocking the former Lagos State Governor.

The one-minute video captured some Pyrates Confraternity members dressed in red and white attire dancing and chanting thus, “Hand dey shake, leg dey shake, baba wey no well he dey shout Emi Lokan,” roughly translated to mean “With an unstable hand and leg, a man with a frail health is sounding off that it’s his turn to be Nigeria’s president.’’

WITHIN NIGERIA had reported that Soyinka who founded Pyrates Confraternity as a university student in Ibadan, Nigeria, described making a mockery of Tinubu due to his ill-health as distasteful.

“I have listened to the lyrics of the chant intently and I am frankly appalled. I find it distasteful. I belong to a culture where we do not mock physical afflictions or disabilities. Very much the contrary. The Yoruba religion indeed designate a deity, Obatala, as the divine protector of the afflicted, no matter the nature of such affliction. This sensibility is engrained in us from childhood and remains with us all our lives. It operates on the principle of mortal frailty to which all humanity remains vulnerable,” Soyinka earlier said in a statement.

“One of my favorite authors, about whom, by a coincidence, I had cause to write quite recently, was CLR James, author of The Black Jacobins, Beyond A Boundary etc. etc. I called him my ideological uncle. He suffered from Parkinson’s Disease, but remained alert, lucid and combative for decades after the onset of the disease. We interacted politically at the Tanzanian pan-African Congress, the Dakar Festival of Negro Arts and a number of other cultural and political fora.

“We met frequently in his lifetime, dined together in restaurants, despite his challenge. it would be unthinkable, and a desecration of his memory to be part of any activity that mocked his affliction. A further statement will be issued when I have made further enquiries into this strange, uncharacteristic outing of the association.”

According to SaharaReporters, a close source to Tinubu, However, said that the APC candidate and members of his team are upset that Soyinka “systematically revealed that Tinubu got Parkinson’s disease, thereby confirming that he’s an invalid candidate.”

“They are angry that Prof. (Professor Soyinka) revealed too much about Bola Tinubu’s health condition,” he added.