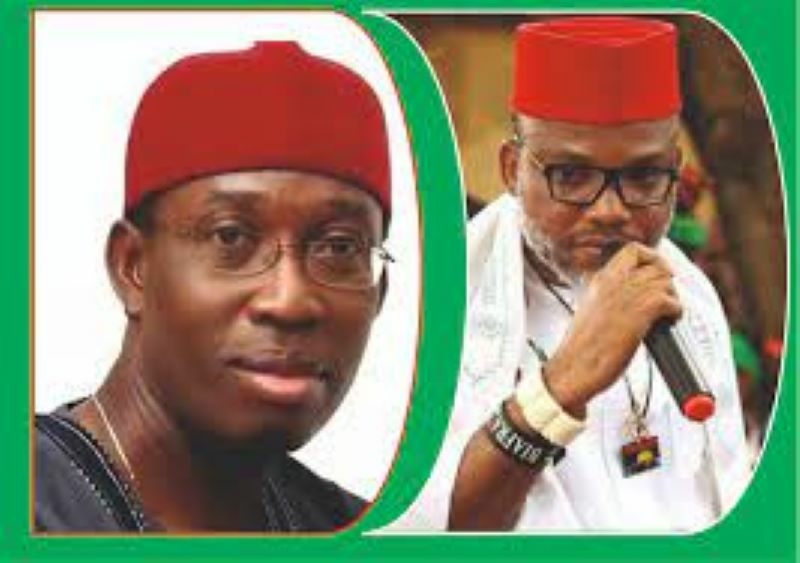 The Indigenous People of Biafra (IPOB) has threatened to render the vice-presidential ambition of Delta State Governor, Ifeanyi Okowa, a mirage if he fails to do something about alleged killings of innocent citizens in the state.

IPOB’s Director of Media and Publicity, Emma Powerful, said this in a statement on Wednesday.

The pro-Biafra group reiterated that it was not a terrorist organisation, adding that the recent United Nations’ pronouncement that it was a peaceful movement buttressed the need to treat its members as non-criminals.

The statement read, “The attention of the global movement and noble family of the Indigenous People of Biafra under the command and leadership of Mazi Nnamdi Okwuchukwu Kanu, wish to draw the attention of Ifeanyi Okowa, the Delta State governor, over the killing of innocent citizens in Delta State by Nigeria compromised security agents in the State claiming that they have killed IPOB and ESN.

“However, IPOB members are peaceful and not terrorists to be hunted and killed.

“We boldly want everyone, including Nigeria terrorist sponsoring government, to understand that being an IPOB member is not a crime. Recently, United Nations Working Group, in their public opinion defined IPOB’s struggle as a peaceful movement seeking lawful Self Determination from Nigeria.

“If Ifeanyi Okowa continues to play ostrich while this barbarity and shielding of innocent people’s blood continue, IPOB will ensure that his Vice Presidential ambition becomes a mirage.

It added, “IPOB is peaceful in all its operations. ESN under IPOB-DOS is only after Fulani terrorists masquerading as herdsmen in our bushes and forests who are raping our mothers, wives, and sisters.

“Also, there was no ESN operative or IPOB member killed in Delta State. Rather, innocent Biafran youths are being massacred at the watch of Governor Ifeanyi Okowa. We challenge Nigeria police to publish the names of police officers killed by IPOB and ESN in Delta state.”