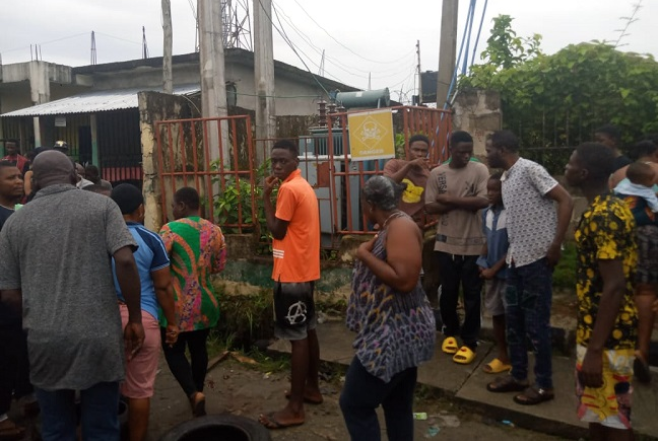 A yet-to-be identified man has been confirmed dead after he was electrocuted in the early hours of Wednesday in what was described as a failed attempt to vandalise a transformer along Osiri road in Yenagoa, the Bayelsa State capital.

Some residents who spoke on condition of anonymity said that the suspect succeeded in cutting two out of the three armoured cables but unexpectedly met his untimely death when Port Harcourt Electricity Distribution (PHED) Company suddenly restored power in the area around 4 am.

It was gathered that one out of the three cables connected to the transformer had been cut out and rolled into a bag, residents discovered the burnt and lifeless body of the suspected thief inside drainage close to the transformer.

The scene also appeared as though the vandal didn’t die instantly when he was electrocuted but seems he was beaten to death by the first set of people who discovered him in the wee hours.

One of the residents said, “he was electrocuted but people who saw it happen may have beaten him to death. Look at his body completely burnt, it is very obvious that he was electrocuted which threw him straight to the gutter. But maybe that time, he was still alive and some person finished him up.

“He has already cut down one of the cables, maybe he tried to complete the cutting from the base before the light came. These people want to kill us in this Osiri. Next thing, they will tell us to contribute money for another armoured cable. Even after we have contributed and the transformer is restored, we will be seeing light once every month, sometimes two months.’

Speaking to newsmen during an interview, the Commissioner for Power and Water Resources, Hon. Ebitein Tonyon said it is a pity that the young man lost his life unexpectedly, but that it will serve as a very big lesson for those who have resolved to steal in the state.

“It has become endemic that on daily bases we experience vandalisation of transformers and armoured cables. And not only this including the tollers in the state. This is going to be a very big lesson to those that are doing that.

“The government has been doing their best and I keep on telling people even on the radio that the individuals, those that are living in the streets, the roads have the responsibility to protect government properties. The transformer you see here was installed by the state government and the government installed it for those in that environment.

“The people living there have the responsibility of taking care of the transformer that is in their domain. If you trace this young man, sometimes he may be linked to somebody living within this vicinity who knows the in and out of this transformer that came to do this. So, it is for every individual to take responsibility to protect government property,” he said.